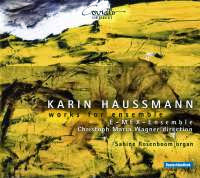 German composer Karin Haussmann (b. 1962) has as her starting point the creation of sound in its new music essence. Works for Ensemble (Coviello Contemporary Deutschlandfunk COV 91410) gives us a nicely varied assortment of five of her recent works as played with detailed attention by the E-MEX Ensemble under Christoph Maria Wagner.

These new works have flow, much attention to timbres and spatial unfolding within a realm of high-modernist abstraction, but without especially showing a standard pointillistic influence via Darmstadt and the serialists. The compositions generally unfold theatrically and evocatively without having detailed literary analogs. Haussmann creates abstractions that convey meaning without relying heavily on extra-musical thematics, though often based on one or more coloristic, gestural or conditional principles as starting points. But make no mistake, there is nothing cold or clinical about them.

The opening work on the CD, "Two Movements for Piano and Ensemble" (2008) makes use of jagged figures in the piano while the ensemble has moments where it "breathes", sounds continuous figures in a kind of breath-like flow. In the second movement the ensemble moves away from responding to the piano and more to articulating varied forms of periodicity while the piano widens its role to a mysterious series of clusters and utterances, all metaphoric of how a balance wheel functions in a mechanical clock. The music has a magical quality.

"a fuoco lento" (2009) premiered at a culinary event, hence the literal meaning of the work's title, "at a low flame". Haussmann conceived of the work as initially limited like a kind of entree made of a few key elements, ingredients as it were. The note b-flat, the bowed and striking of metallic objects by the percussionist, both are are key elements that the composition works around.

The solo organ work "con flessibilita" concerns itself with the various sound resources, the various manuals and the two Venetian swells available to the organist. Haussmann successfully gives the organ a flexible tone-color quality which makes of the organ a more permeable, plastic color-wheel of sorts.

"Four Movements for Cello, Accordion and Ensemble" (2010-2011) works further with the ideas developed in "Two Movements". The sound capabilities of the cello and accordion were chosen to create contrasts that the ensemble reacts against. The soloists take on the role of "recoloring" the music through exerting influences, as the composer says, which brings the ensemble into a kind of timbre-oriented dialog. So we have clusters in the accordion, for example, versus sustained multiphonic tones in the cello, and so forth.

"Quartet" (2000) finishes off the program with trumpet, flute. cello and piano sounding, in the composers words, as a single instrument. Haussmann experimented with trumpeter Marco Blaauw in creating "disaltered chords", richly harmonic, rough multiphonics that tend to beat with variable periodicity. The quartet gives a four-instrument analog of the disaltered chordal sound.

All these various concepts put into play by the composer results in some striking music, high-modernist yet freshly concocted into striking sound color worlds that make the music particularly contemporary, of our time.

It is music that will be appreciated by the adventurous modernist. Time spent acclimating oneself to the new worlds of sound pay off with a very rewarding experience.