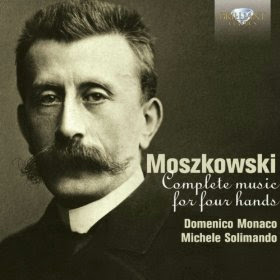 If you are well familiar with composer Moritz Moszkowski (1854-1925), German-Jewish composer of Polish descent, you have a leg up on things. I believe I have a piano concerto of his somewhere in my stacks of vinyl, otherwise he was an unknown quantity when I opted to review his Complete Music for Four Hands (Brilliant Classics 94835, 3-CDs). He was admired by Paderewski, more well known in his day perhaps than ours, but that latter of course says nothing against his music.

The box set of three CDs gives you everything he composed for piano four hands, and that's a good deal of music. Domenico Monaco and Michele Solimando render the music with great charm and spirit, which is exactly what the music needs. We have to remember back to a time when of course there were no radios, televisions, music audio players of whatever stripe. Most people had the parlor piano installed in their residences, certainly those musically inclined. Piano music that was simple enough to be played by the amateur could sell as sheet music to the profit of composer and publishing house, especially if the music caught on with the public. If your house had more than one accomplished pianist, music for piano four hands could give the family some fine entertainment.

These Moszkowski works seem designed and well-suited for such musical evenings. The parts are not too difficult for the amateur, yet they yield some very full pianistic music with a large sound and some very memorable themes. Some of the waltzes and mazurkas are regularly ordered so that dancing no doubt was also possible.

Before you say to yourself, "sounds like a banal sort of waste of time" consider that these pieces are very well-constructed, have some excellent thematic memorability, and have in addition some of Polish and even (latent?) Jewish folk qualities--and other attractions that make them hard not to appreciate.

Moszkowski was no hack, nor did he engage in the sentimentality that makes some parlor piano music from the era unbearable. Not everything is simplissimo, either. There are at times extension of Chopinesque poeticism, regularized without much rubato to make a four-handed presentation fairly straightforward.

I found the music delightful, more than I had expected in fact. They transcend time and place and speak to us. The romanticism is contained in classical structure and folk effusion, so the music does not sound dated.

Plus this box set is at a very decent price. An evergreen forgotten is still an evergreen. This music remains fresh and lively after all the years, and the performances are all what one would hope for.