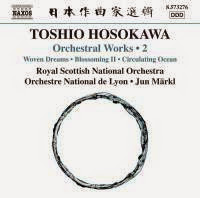 Japanese composers of the modern classical persuasion have formed an important part of world output from the '50s on. Takemitsu, Mayazumi, Ishi are great examples. And then there is Toshio Hosokawa (b. 1955), one of the preeminent living exponents.

His music has crossed these pages before, notably Landscapes (see posting from November 3, 2011). He returns today with Orchestral Works 2 (Naxos 8.573276), covering three recent works performed by the Royal National Orchestra or the Orchestre National de Lyon under Jun Markl.

They are quite attractive pieces. "Woven Dreams" (2009) has a Zen mysteriousness about it, as does "Blossoming II" (2011). Both are more soundscaped unfoldings than linear events, they evolve and transform more than they are sectioned. There is an acute sensitivity to sound color in a modern context and Hosokawa is especially effective in creating his own wordless narrative of soundings. "Blossoming II" has a more dynamic outlook, but both ebb and flow in original ways.

"Circulating Ocean" (2005) divides into 11 movements, played continuously. The composer conceived here of "sound as water", as he explains in the liners. It too begins mysteriously, quietly, almost impressionistically, with waves of sound gently breaking at first. The music gathers density, clouds form, breakers grow in sonic strength, the music's agitation increases, then there is a suspended feeling as the clouds amass. There is then a tremulous agitation as a storm breaks out. The waves again gather momentum, then recede into relative quiet once more. The work ends with mystery, as it began. It is a wonderful work in its otomatopoetic reading, its analog of natural forces at work. In a way it is akin to Honegger's "Pacific 231" and that work's musical embodiment of a train gathering steam and heading with increasing speed to its destination, only Hosokawa gives us the ocean in all its Japanese Zen mysteriousness. It seems fitting and fills one with a kind of wonder.

Both "Dreams" and "Ocean" are world premiere recordings. All three works give us a vivid picture of Hosokawa's modern orchestral poetry. They are extraordinarily interesting, the performances are convincing. All is worthwhile.

Highly recommended, especially for those seeking to grow with Japanese modernist music from our current millennium.