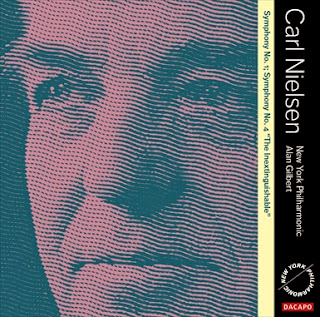 Who would have predicted at the turn of the 19th century what was to come in the 20th? Looking back now, we see an incredibly varied 100 years, with innovations piled one upon the other. Yet it is no longer shocking as it once was found, the newness now mostly familiar, the music appreciated more and more for the brilliance encountered.

Danish composer Carl Nielsen came along in the beginning of the period and was a force for the new, one of the brooms that swept out the excesses of romanticism, yet did something with that legacy in the process that was totally unprecedented. He refashioned it in his own image, made it a force for modernism that had neither precursors or followers in the direct sense. Nielsen was a school of one.

His symphonies, all six, take their place in the pantheon of remarkable cycles. Happily, the New York Philharmonic under Alan Gilbert have embarked on the journey to realize the cycle today in new recordings. The second volume, with the Symphony No. 4 "The Inextinguishable" and the Symphony No. 1 (DaCapo 6.220624) has just come out. It is seminal, I would say.

The New York Philharmonic had a great Nielsen interpreter in Leonard Bernstein last century. Now it has Alan Gilbert.

The first symphony is up there as one of the boldest first symphonies around. Comparisons with Brahms' and Mahler's firsts come to mind. All three entered the fray with a remarkably mature first, having all the seeds in place for their fully blown later works, yet retaining a self-contained completeness that sets them apart as marvels in their own right.

Nielsen's first is the most romantic, perhaps, of all the Danish master wrote. Yet thematically there is something very originally Nielsenian about it. It sings in the hands of Gilbert and the New Yorkers. The flow and differentiation of voices puts this one on a par with the very best on disk. You forget that the first is necessarily a prelude of even more "characteristic" Nielsen symphonies. And with a work of this dynamic beauty one should hear it on its own terms.

On the other hand the 4th, the "Inextinguishable", gives us the fully realized Nielsen, which you could say also of his 3rd, 5th and 6th. It is a late romanticism so totally original that it does not synch with the others, partially because it is drenched with Nielsen's very own modernism. It is all quite involved on a tonal-harmonic level. It creates lush carpets of mystery and a sometimes semaphoric, signalling melodic structure that comes out of the orchestra like an impassioned, urgent communication, yet relates to the overall arc of the symphonic game plan in the most organic sense. Like Nielsen's use of the snare drum in the 5th, the 4th has some passages for timpani that function melodically and dramatically. And of course that is only a part of the lucidly urgent singing quality of Nielsen's later symphonies.

There is a Northern feel in Nielsen's best music that has no real counterparts. Sibelius may come the closest, but he had a lyric quality that Nielsen has in a different but parallel way, but of course Nielsen pushed his music much farther away from a derivative romanticism into modern territory. Sibelius had his own romanticism, and it pretty much stayed put inside that in its own original way. Nielsen takes more risks in his later symphonies and they pay off every time, virtually speaking.

Alan Gilbert's Fourth is a triumph. There is strongly defined part writing that Gilbert realizes vividly, and a dramatic push on the edge of the ecstatic that this version captures beautifully.

It is a one-four coupling of great strength and ruggedly craggy beauty. There is no better Fourth out there to my mind, though many good ones. Gilbert and the New York Philharmonic give us Nielsen in all his glory. The First is given all its due; the Fourth shines like a beacon.