Julian Wachner, Symphony No. 1, Works for Orchestra and Voices 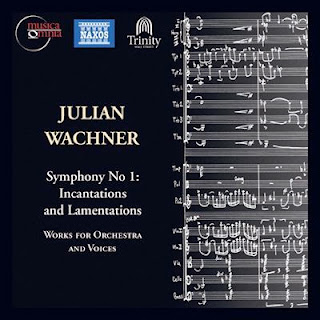 Over the centuries there have been many composers who spent a good deal of time conducting others' works and learning a great deal thereby on the specifics of orchestration and musical conception of the greats first-hand. Julian Wachner is a contemporary who has done that. He has especially done so in the context of sacred music, holding down a number of musical directorships/conducting positions at such institutions as the famous Trinity Church on Wall Street.

He comes to us today in the guise of a composer, and an excellent one he is. Specifically we have a three-CD set of his music, performed under his conductorship, in the Symphony No. 1: Incantations and Lamentations, Works for Orchestra and Voices (Musica Omnia 0604 3-CDs).

The set contains so much that is worthwhile that trying to discuss each work might get a bit tedious. Suffice to say that the 13 works proffered in the set cover a good deal of time, from the 1989 "Psalm Cycle I" to the 2014 "Blue, Red and Green". In the process the set covers a developmental traversal of musical space as well. A good bit of it is sacred music, most is very contemporary in tone, though a few channel early church music styles to their own end. Wachner has an excellent knack of getting stirring sounds from voices, both soloists and choirs. He also has mastered orchestration so that the instrumental parts work together for a lucid transparency or a rousing mass of varied voices.

Wachner has a pronounced rhythmic sensibility and puts it to good use in movements that have shifting meters and a dynamic thrust to them. At some point you occasionally detect a Bernstein influence (the Mass sometimes comes to mind as a precursor), other times some of the voicings and counterpoints of later Reich also seem to be launching points, still other moments there is a jazziness to it all. But then there are the tender and mysterium aspects, too. None of it sounds derivative. It does seem an integral part of a developed grand tradition of sacred music, with Wachner taking his place in a potential pantheon. But time will be the judge of that.

In the meantime we have this set to appreciate. The works are substantial, the performances lucid and bold in outline (listen for example to the Trinity Choirs) and the sound well-staged, spectacular.

Anyone who wants to know what's good out there in American modern sacred music must hear this. If that is not your specialization you will still be well-served by this set. The music comes from a composer who needs to be attended to, for music that holds its own in a modern contemporary tonal mode.