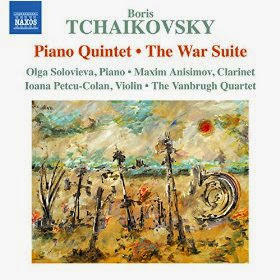 Tchaikovsky! Not Pyotr Ilyich, but rather Boris (1925-1996). He too was Russian, one of the principal composers after Shostakovich. Why we in the West don't know much of him I am sure is complicated, but his music has begun to be heard here, especially on the Naxos label. A new CD of his chamber music is now out, well played by the Vanbrugh Quartet and guests. Two works are represented, the Piano Quartet and The War Suite (Naxos 8.573207).

This is music of great gravitas, and in that way his affinity with Shostakovich is clear. Yet the music speaks eloquently for itself, as a bellwether of Boris Tchaikovsky's inventive originality. The liners to the CD tell us that the "Piano Quintet" (1962) is considered by many to be his finest chamber work. Listening one can hear why. It is filled with dramatic impact, modernist stridency and Russian brio. On this basis alone I find myself wanting to hear more of him.

And more we do hear, namely "The War Suite" (1963/2011) for string quartet and clarinet (the later played well by Maxim Anisimov). It is based on Tchaikovsky's film score for While the Front is in Defence, about the WWII battleground southeast of Leningrad during the winter of 1942. In the suite form this is the world premier recording. The material from the score was also worked out as Tchaikovsky's "String Quartet No. 3". As a suite we hear music depicting war and its terrors but also friendship, heroism and tragic love. It is a varied work, both tender, brutal and brusquely lyrical. The clarinet rings out in nicely staged contrast to, and in sonorous blend with the quartet. It is a work that seconds the Quintet as a good companion, with an enlarged pallet of moods, albeit with less of the structural rigor and perhaps a bit less of the brilliance of the former.

The two works most certainly give you a good idea of Boris Tchaikovsky in the chamber setting. Like the 20th century Russian masters before him he shows an innate sense of what roles each instrument will play and proceeds to make very idiomatic use of them for an irresistibly dramatic result.

All modern Russophiles will no doubt find this disk rather essential. It is music that holds its own for originality yet partakes of the Russian modernist ethos, both of which situate the works nicely as part of a continuum. The Vanbrugh Quartet, pianist Olga Solovieva, and clarinetist Maxim Anisimov give us impassioned performances filled with brio and lyrical clarity.

Very impressive music, very well played. This is a good one!