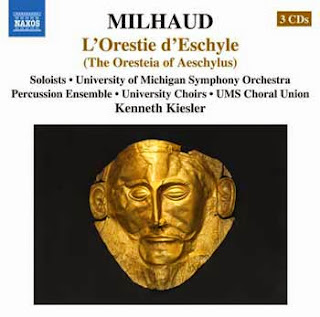 We still have catching up to do for the 20th century. Darius Milhaud (1892-1974) is a beautiful example. Between 1913 and 1923 he wrote the epic L'Orestie d'Eschyle, a massive three-part work for soloists, a large choir, orchestra and percussion ensemble, based on the Paul Claudel libretto of the Greek plays and their poetic re-presentation into modern French.

Kenneth Kiesler and the University of Michigan Symphony Orchestra, Percussion Ensemble, University Choirs and UMS Choral Union with soloists give us a complete modern recording on a new release (Naxos 8.660349-51 3-CDs). It is a revelation.

It is a huge, sprawling work, filled with drama and impact, excellently performed by the amassed forces at hand. Indeed, it is an early-modern blockbuster. That it is not better known no doubt has something to do with its length and breadth. For all that it is a major find for anyone not familiar with it, an epic work of great power.

Milhaud's polytonality and sense of aural drama gives the music an ultra-high-modernist charge that only Wozzeck rivals from the period. Even then, this achieves a hugeness even Wozzeck does not (though of course that opera was not about density as much as psychological expressiveness).

There is no let up, even parts that might have been scored as recitative are chanted in a rhythmically primal ritual way.

There's too much music to comment on in detail. And I am still digesting it. It's enough to assert that L'Orestie d'Eschyle is a forgotten modern masterpiece, fully deserving of recognition. This Michigan/Kenneth Kiesler performance gives us the work in all its glory and excitement.