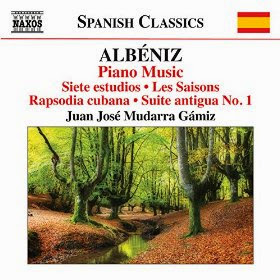 Isaac Albeniz (1860-1909)? Piano Music, Vol. 5 (Naxos 8.573293)? Yes. I've been preoccupied with other releases so have missed first first four volumes. But based on this one, with the very well-suited Juan Jose Mudarra Gamiz at the piano, this is some pretty excellent coverage.

The fifth volume explores Albeniz in the days when he was making his way as a piano virtuoso, 1881-1892. As a composer for the piano he was essentially working in an advanced salon mode. So it was music designed to please, not music to upset the apple-carts of expectation.

Yet the promise of his music can be heard plainly and rather delightfully here. There is rhythmic vitality, a kind of punchiness that comes out of the way he channeled his Spanish heritage. And there are glimpses of the colorful French influence, his take on impressionism, not fully realized but still latent.

So in spite of the limitations he imposed on himself, his need for a certain accessibility, this early music has a great deal of charm and a vivid melodic directness.

Juan Jose Mudarra Gamiz goes quite a ways with these deceptively straightforward pieces. He gives them a sharply rhythmic snap when it is called for, shaping the musical momentum and definition with appropriate, directly charged forward motion.

So if these may not show us the mature, fully developed Albeniz, they give insights into his beginnings and have a good deal of charm and fresh air, a lyricism and tunefulness that was to come out ever more originally in subsequent works. The other volumes cover the later masterpieces and no doubt are more essential. Volume 5 gives us a lesser-known but vivid set of works most of us have not heard before in sparkling renditions. And that is worthy and valuable in itself.