Paul Dolden, Who has the Biggest Sound? 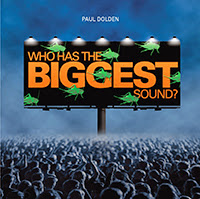 When your ears meet the immediate present, the music that notifies you that it is not, certainly, 1910....Nor is it 1930, 1950, 1970, or even 1990....When you hear music that tells you it is 2014, is it a cause for celebration? Perhaps not celebration necessarily, but certainly it causes you to wake up a little bit, take stock of where you are and where we all are. To rethink the possibilities that music holds for us.

Electro-acoustic wizard Paul Dolden and his Who has the Biggest Sound? (Starkland 220) has that kind of abrupt contemporaneity. He is a sample creator and manipulator, sample here meaning a recorded sound sequence of any sort. His samples can be quite lengthy (as opposed to the typical use of samples in the commercial music world) or quite short. Most importantly the samples, whether they are borrowed from source materials or fashioned by Dolden himself (I believe here much of it is the latter), are made anew by virtue of Dolden's acoustic-musical vision, his eccentric and unexpectedly wayward combinatory logic, which is the critical element at work here.

He combines, electronically transforms and re-sequences diverse sounds into often surprising juxtapositions, for an electro-acoustic orchestral melange that shows extraordinary creativity and a sense of direction.

There are two interrelated works presented on the album, the title track "Who has the Biggest Sound?" (2005-2008) and "The Un-Tempered Orchestra" (2010). Both have a jagged abstractness about them, yet an organic through-flow, an asymmetry and also a sense of poetic humor, which is somewhat rare these days.

"The Un-Tempered Orchestra" seeks to counter Bach's "Well-Tempered Clavier" by creating something the opposite, a six-movement work that uses non-tempered tuning and is as formally amorphous as Bach was formally ordered and symmetrical in his brilliant way.

"Who has the Biggest Sound" is in 15 parts and following the tongue-in-cheek title creates a sonic largess and diversity that adapts and parodies styles at the same time as it has sound-color innovation as its most serious goal.

The results in both cases are almost unworldly at times, gamelan sounding clanks, orchestral audio super-exotica, insects, animals, rock chaos, percussion blasts, a cowboy melody, a tango, you practically name it and there's something in there you will find. And the point of all this diverse material is an intent to refabric our perceptions and expectations of what is what in a rather radical way.

That he succeeds in creating phantasmagorical universes that give you genuine pause attests to his ingenuity, vision, brilliance even. Paul Dolden shows us that he is one of the most consistently interesting and inventive electro-acoustic composers-assemblers today. He is most definitely a force to contend with here in 2014 and no doubt (I would hope) for many years to come.

For more on the album and Paul Dolden and/or to order a copy go to http://www.starkland.com/st220/index.htm