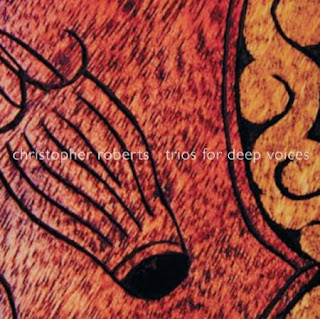 Not every album changes the world. That's fitting because world-changing events are not something we can handle on a daily basis without overload. Today's album has no intentions of a foundational reworking. But that is not to say it is in any way ordinary or everyday.

It's a series of works for three contrabasses by Christopher Roberts. Trios for Deep Voices (Cold Blue 0030) comes in part out of the insights and impressions gained from an extended visit by the composer to the Star Mountains in Papua New Guinea. His participation in and appreciation of the primal local music and the sounds of nature there gave him pause and were inspirations for these five contrabass trios.

Roberts extends the range of the three instruments by utilizing harmonics extensively. In this way there are the expected deep bass notes but also an upper range to work with. The music has some repetition but like the traditional music of New Guinea the horizontal prosody of A-to-B discourse is predominate.

There are intervallic primes along with a compositional inventiveness that makes this music belong more to the realm of radical tonality than minimalism. The sound of the bowed contrabasses (played by the composer, Mark Morton and James Bergman) has the effect of creating an ethereal dream world that nonetheless has a robustness born of the physicality of the instruments played together.

The music comes together and rewards the attentive listener with a sound all its own. There is much to appreciate. I eventually found myself falling more and more deeply under its spell. I think perhaps there will be plenty of others who will feel the same way after deep listening.

As much as someone like me loves the sound of the contrabass, in time I heard the trios as music that goes beyond instrumentation to a contemplative space, as the composer no doubt intended.