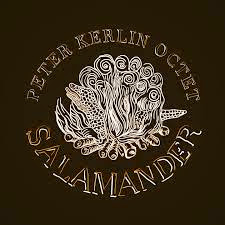 In keeping with the theme Friday, today another musical presentation that combines new music classical with cross-genres, in this case jazz-rock.

Peter Kerlin composes the music and plays bass on the Peter Kerlin Octet and the highly creative five-work set entitled Salamander (Innova 879). There are plenty of predecessors for this sort of hybrid. Multi-reed composer Eric Dolphy had in his last stages of his career a remarkable compositional new music stance combined with avant jazz on recordings such as Out to Lunch back in the mid-'60s. And there have been others. Peter Kerlin channels what has been done and comes through with his very own way. The Octet goes for a wide-ranging through-composed suite of works that are in some ways minimalist and post-modern but with the energy, openness and charge of jazz-rock.

The players in this ensemble all seem to have a jazz background, so that the playing of the music has a looseness and freedom and includes I can presume more than just what has been written/pre-arranged. Though the total personnel comes to a bit more than an octet--three bassists, two vibraphonists, three violists, an organist and two drummers--the idea of the initial instrumentation must have been eight-part and others added or subtracted as needed in the recording-realization process. No matter.

Drummer Mike Pride and violist Jessica Pavone are the more well-known players here, both with a good deal of new jazz cred, but the group sound has that as part of the major thrust throughout.

Kerlin brings in inventive, attractive motives, generally subjects them to mesmeric repetition, with vivid ensemble colors. The filling out with atmospheric tones and improvisatory flourishes makes this much more than minimalism in some predictable sense. It is almost like a series of musical solar systems, with some things in orbit around a center and other non-circular entrances (like meteor showers or cosmic rays subject to different trajectories?) coming through the various zones for a series of mini-universes of sounds.

The music bears very well repeated hearings. Anyone with a sense of possibilities and an openness to the new will find this music as pleasurable as it is innovative. I hope we can hear more of this sort of music from Peter Kerlin in the near future.