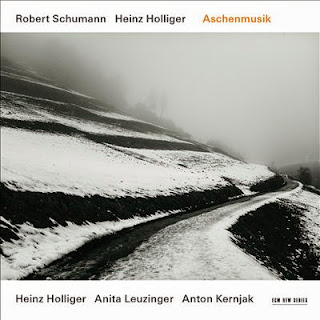 New music, like the Phoenix, can arise out of the ashes of the old. In today's case that is literally true. We turn once again to the music of Heinz Holliger, as we did on yesterday's post. Today we have Aschenmusik (ECM New Series 2395), a program of some superlative Robert Schumann chamber music coupled with Holliger's "Romancendres", a centerpiece, cornerstone work having to do with the destruction of Schumann's "Five Romances for Cello", which Clara Schumann willed and executed at the end of her life, burning it to ashes to ensure it was never published.

Anita Leuzinger is on cello and Anton Kernjak is at the piano for this version, and once again it haunts with Holliger's outrage of loss acting as the cement for a thoroughly modern work that incorporates German alphabet transliterations into tone from key words surrounding the event, plus well-integrated quotations from Schumann's works. The resulting music has a Phoenix-like rebirth feeling. This music substitutes for the "Romances" without recreating them (which in any event would be impossible since no trace survives). It is a new Phoenix, recognizable only as itself, a marvelous creature. As good as yesterday's version was (see Wednesday's post), this one has a slight edge for its acoustic-dramatic single-mindedness coupled with ECM's beautiful sound staging design.

The music is surrounded by some Robert Schumann chamber gems that give great contrast to the "Romancendres". Heinz Holliger joins with Anton Kernjak for Schumann's lovely "Romances for Oboe and Piano" and the obscure, but fascinating and vital "Studies in Canonic Form", which brings the oboe d'amore into the picture. Finally we get Schumann's "First Sonata for Violin and Piano" with Anita Leuzinger substituting her expressive cello for the violin part, which Schumann had suggested back in the day as a valid possibility. There is much to appreciate in these performances. The sonata is as spirited and lively as you could wish for; the pieces with Holliger have wonderful rhapsodicity alternating with an infectious jauntiness.

The romantic Schumann and the modern edgy Holliger-as-composer rub shoulders here in ways that make for a vivid juxtaposition, less a blending than an oil-and-water conjoining, a lava lamp of contrary substances and their interaction.

Holliger sounds as beautiful as ever on the double-reeds. Leuzinger and Kernjak show themselves articulate and moving on both musically semantic turfs. Hearing the two styles together with these particular pieces draws out Schumann the musical architect. With him it was never just about feelings. It was about structure. And so it is true in very difference ways of Holliger.

It's a recital that sparkles with brilliance. So which should you get? The all-Holliger Haefliger-Vonsattel disk spoke of yesterday or today's Aschenmusik? I can't answer that question for you. Yesterday's album is filled with brilliant music in the high modern camp, played excellently. Today's album gives you the "Romancendres" plus some idea of what the ashes may have contained, a Holliger fixated with what we lost when we lost the Schumann work. It is also excellent. Really, both are wonderful additions and do not truly duplicate themselves. And then you would have TWO versions of Holliger's lucid work to compare and contrast.

So get this one and get the other one, too, if you can. You can't go wrong that way.