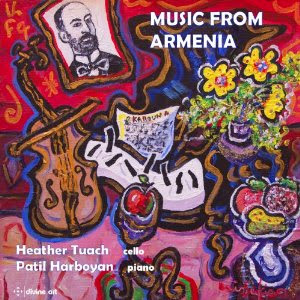 Like I suspect many adventurous listeners, in my early years I came across the Armenian mode through certain works by Armenian-American composer Alan Hovhaness. I fell quite thoroughly under the spell of the way the music spoke to me. Time went by and an exploration of Armenian folk music followed. Since then I've always been interested in Armenian composers, Khachaturian being the most prominent, but others when I happen upon them.

So when cellist Heather Tuach and pianist Patil Harboyan came out with the anthology Music from Armenia (Divine Art 25075), I jumped at the chance to listen to and review it. What we have are 13 works by 20th-century Armenian composers, in some cases specifically arranged for cello and piano, in other cases written for the instrumentation.

This is often music in a neo-romantic vein, but nearly always recognizably in a minor Armenian tonality, with typically Armenian tonal phrasing. And of course that's what makes it especially interesting.

You may or may not be familiar with the composers (I wasn't) depending on your knowledge of the era and region, but they all come through with a flourish captured well by Tuach and Harboyan.

All told this is a musical program to delight those who respond to the magic of Armenian eastern lyricism. A modernist might find more immediacy in some of the Hovhaness works, but this album is a most pleasing refuge of its own. And the playing is very idiomatic and appropriate.