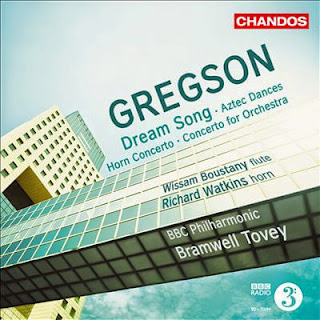 Those who follow closely the English-British new music scene may know the work of composer Edward Gregson (b. 1945). I have missed him up until now. What we have today is the fourth volume of his orchestral music, Dream Song, etc. (Chandos 10822). The liner notes make mention that the works here show the various influences of Hindemith, Bartok, Vaughan Williams, Tippett, Shostakovitch and Berg. Indeed at various times you can hear that as you listen to the four works composed between 1971 and 2013.

The "Dream Song" (2010) starts off the program with a dramatically original modernity. Traces of the Berg of the "Violin Concerto" and symphonic Shostakovitch can be heard transformed into Gregson's own personal framework. Menacing nightmarish passages alternate with dreamy pastoral for a work of considerable orchestrational excitement and a singularly expressive temper.

His "Horn Concerto" dates from 1971, though we hear the orchestral version from 2013. The Hindemith influence is out front in angular modulations of fourths and such. Yet even in this first important period there is an assurance and personal stamp on the music. The horn part is played with a rather heroic bravura by Richard Watkins.

The premier recording of the recent "Aztec Dances" (2013) shows again, not surprisingly, a stylistic development into the more contemporary modernity. It is subtitled "Concerto for Flute and Ensemble". Wissam Boustany plays the solo part with a good deal of sprightly energy and a great command over the various sound colors Gregson calls for in the flautist's role. The work begins with a mysterious "Ritual Pastoral" part that puts the flute out front against a modern yet translucent orchestral texture. A slow "Fertility Dance" builds from there both lyrically and with "primitive" elements. Rhythmic aspects are prominent. The longer "Ghost Song" movement returns to a mysterious demeanor, only darker sounding with more interjections of brash primitivism. The solo flute part has a good deal of colorful passage work here that has its complement in orchestral response. A "Sacrificial Dance" conclusion finds the rhythms more insistent, occasionally (and almost inevitably) referencing Stravinsky's "Rites of Spring", but doing so obliquely as Gregson unravels his strong sense of orchestrational brilliance.

The "Concerto for Orchestra" (1983, revised 1989, 2001) is a fitting conclusion to the set, with dramatic late-modernist virtuosity out front, dynamic and excellently wrought. Clearly Bartok's classic work of the same name has given Gregson impetus to do something wholly his. It is an exciting work.

So there we have it, four works of note from a genuine artiste-craftsman with a beautiful sense of orchestrational vibrancy. The BBC Philharmonic under Bramwell Tovey do the works full justice, as do the soloists. It is a most rewarding listen from a composer who deserves our attention and admiration.