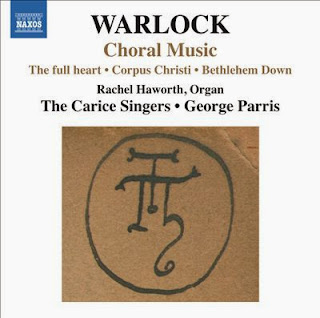 Any reasonably informed classical Anglophile knows about the burgeoning of the modern English composer from Elgar through Vaughan Williams, Holst, Britten, Tippett, Delius, Maxwell Davies and on...but of course there have been others active in the last century that some of us might not know much of, composers who well deserve a hearing.

Peter Warlock (1894-1930) is one that I've missed up until now. The Naxos volume Choral Music (8.573227), with the Carice Singers under George Parris, fills things in nicely with a vivid picture of his choral writing. There are 25 short works on the album, illustrating well the composer's idea of creating "a melody of chords". They fit in with English choral tradition in many ways, yet reflect often enough the more advanced harmonic world of Delius and Vaughan Williams, with something of the latter's rustic charm at times.

The Carice Singers under Parris have a good deal of sympathy for the music and accordingly give us rousing, spirited versions of the music, at times sublime and angelic. Here and there one or two seconds might have been well-served by an alternate take when the sopranos are reaching for a high note that is just a shade off, where you know they could make it if given another opportunity. These are minor compared to the marvelous job they do on the whole. We are talking about one or two moments in a lengthy program, nothing to mar the excellent overall impression.

There are a couple of dandy Christmas carols, which are good enough that for a moment you forget it is August, as it is right now as I write these lines. They should be sung often. But that applies to the choral music on this album across the board.

There are true gems interspersed throughout--some very beautiful music. It's all good. Any Anglophile worth her or his salt will no doubt respond as I did.

Excellent fare, served up with a relish that is hard to resist! Peter Warlock had a flair for choral writing and you get an excellent idea on this disk. Very recommended.