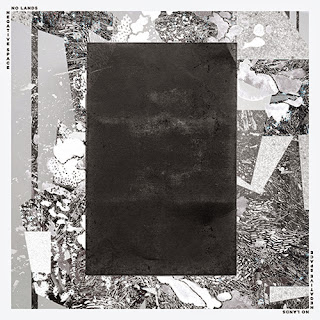 I grapple now and then about which blog to put what. Sometimes a release is so unusual it fits nowhere and everywhere at once. That applies to Michael Hammond's virtual group No Lands and their album Negative Space (New Amsterdam). It is a virtual electro-acoustic album with some guitars, real drums now and again, a helium balloon sounding set of vocals and a huge sound.

It's not exactly classical or new music but it is too new music-like to just say "rock" and leave it at that. The sound is so big that I know it will be of interest to those who listen to and appreciate electro-acoustical music, so I decided to put it here.

Michael uses very sparingly a sideman or two. Otherwise it is just him and a studio. Songs are the order of the day, harmonically conventional art songs, made unearthly by the arrangements Michael puts together for these presumably self-penned works.

And it's the orchestral nature of the arrangements that make this music interesting. I'd call him the Brian Wilson of symphonic space rock, but he is not working in contrasts as much as creating big old clouds.

There is no describing the music in detail that would substitute for a hearing. And even then, you must hear it closely to get a handle on it. Suffice to say that the music has a "we are in the future" feel to it as much as anything I've heard lately. That doesn't mean you will like it. I like it quite a bit but not in the sense that I am inside it. I'm looking through a frosted window from the outside and what's going on inside seems good, very good.

So I post here because this IS new music, just not what one expects. It may garner a rock following. College stations will no doubt find it cool. As far as you, the reader, is concerned, try to hear a sample. It's post-something! And post-somethings often find their way to this site. It's modern like a space suit. Use your ears as a guide.