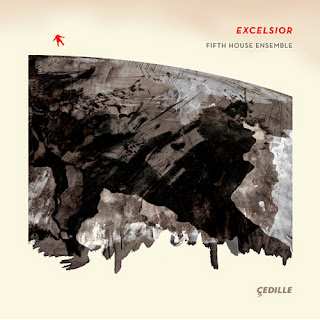 A new Chicago-based chamber group, the Fifth House Ensemble, presents their debut recording Excelsior (Cedille 2014). They come across as a very capable outfit with fine readings of four contemporary works, each work with its own more-or-less post-modern qualities, some rather firmly in the realm of radical tonality.

The title work, a short chamber opera by Caleb Burnhans (b. 1980) that was composed in 2012, features an ultra-tonal panorama with some ritualistic repetition and lyrical diatonic matter-of-factness that centers at the end around a folkishly modal part for soprano. When I first heard it I thought Gorecki's "Third Symphony", but after hearing it several more times I came to find its own special lyricism to be accessible, yes, but perhaps a bit more magical in its impact than was apparent on first hearing.

Alex Shapiro (b. 1962) and "Perpetual Spark" (2011) has a more dynamic energy to it with a motored minimalist piano part that is both echoed by and contrasted with longer melodic figures in the chamber ensemble as a whole. It does have a spark, lyrically so.

Jesse Limbacher (b. 1991) gives us an equally brief "Air" (2012) that brings us a slightly more modernistic palette of tone with some jazzier phrasing and a sound more an extension of Stravinsky's neo-classical and later writing. It has its own life however which the winds of the Fifth House Ensemble realize very nicely.

Finally there is Mason Bates (b. 1972) and his five-part "Red River" (2007). This again emphasizes in lyrical ways the diatonic end of the tonal spectrum in parts, but not exclusively so. There are some mobile phrasings that suggest jazz influences, a prominent clarinet part, and perhaps the most involved and pleasing music of the entire album, in terms of complexity at any rate. It is movingly performed here.

The Fifth House Ensemble gives us a most fascinating, widely open window on the newer music being written today by the younger generation of composers. There is plenty of substance yet it also is a program that has accessibility. For this reason the album may find its way to those not especially looking for high modernism, who either have been attracted to minimalist tonality or are just stepping into the modern compositional world and need something reassuring. At the same time the musical levels are high, so that someone well-versed in the times will find plenty to like.