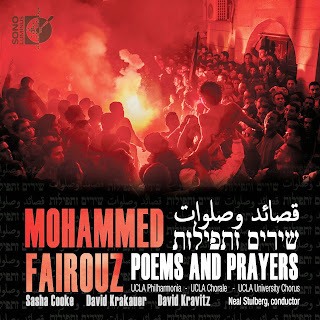 Composer Mohammed Fairouz undoubtedly is a leading light among the younger composers working today. We've already come across two disks dealing in whole or part with his music (type his name in the search box above for those posts), now we encounter one of his most ambitious, a recording of his Poems and Prayers, otherwise known as his "Symphony No. 3", plus the related "Tahrir" for clarinet and orchestra (Sono Luminus 92177, CD and Blu-ray set).

"Tahrir" (2011) refers to the Egyptian uprising in Tahrir Square, Cairo, 2011. The word means "freedom" and Fairouz commemorates the event with music that is in part informed by and structured on Mozart Piano Concerto K. 482 (the first to include a clarinet) and also his Clarinet Concerto K. 622, but does so with the clarinet and orchestra taking on the modes and flavor of traditional mid-eastern music. David Krakauer does an excellent job realizing the clarinet part. The music cleverly and delightfully sets the stage for the larger work to come, "Poems and Prayers".

The symphony (2010) has a great gravity to it, as it both mourns the deaths in the Israeli-Palestinian conflict and prays for peace in that region. Appropriate texts in both Hebrew and Arabic alternate, including a Kaddish. The texts reflect and correspond to the music of both nationalities on top of a sort of neo-classic, neo-romantic expressiveness and attention to form. Mezzo-soprano Sasha Cooke and baritone David Kravitz have important roles in conjunction with the massed choirs of UCLA along with the Philharmonia, all conducted in a moving performance by Neal Stulberg.

In light of recent events in the region, the message of the music becomes even more urgent and contemporary.

The music itself is quite effectively eclectic with modern tonality alternating with mid-eastern modes in ways that move the emotions and express the concern, horror and dismay one may well be feeling as a listener prior to coming to this music.

As with most other Sono Luminus releases the set comes in a standard two-channel performance on CD and a 5:1 version on Blu-ray. I have not been able to audition the latter, but I can imagine that it makes for an even more poignant experience.

Mohammed Fairouz lives up to his promise as a contemporary composer of talent, creativity and even brilliance on this disk. This is not music of a happy sort, but the world has been in the throes of tragic events and Fairouz captures that feeling with a prayer for redemption that all of us can appreciate and fervently hope for.