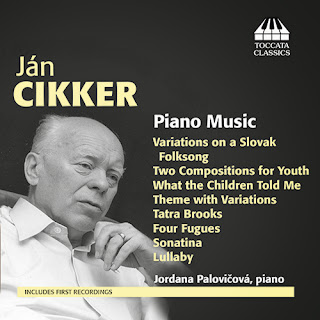 Ján Cikker? He was one of the most prominent and prolific Slovak composers in his lifetime (1911-89). The liner notes to the CD at hand remind us (though I did not know this) that he wrote no less than nine operas. He was an accomplished pianist and composer of piano music that is at present pretty well-unknown around the world, even in Eastern Europe. Yet the music is excellent.

Pianist Jordana Palovičová gives us a most interesting compilation of selected pieces on Piano Music (Tocatta 0270). There are impressionist/post-impressionist elements at play on these works and you can (as the liners again note) discern the influence of Szymanowski and Janacek in the acid-etched dynamism and expressionism to be heard here. There are neo-classical elements here and there as well.

We get a spectrum of works covering much of his career, representing the period from 1932 to 1973. There is a development to be discerned, as one might expect, over the long time span in which he composed, with later works having increasingly modern elements that are of his time yet original in scope. Many of the pieces call for a sensory-motor virtuosity, a scherzo-like playfulness and drive that Jordana Palovičová handles with surety. There is pulsating excitement alternating with a brittle lyricism that perhaps makes him recognizably specific to the modern realms current in his region. But he goes his own way nonetheless.

There is much to appreciate here, from his take on modern neo-classicism in four of the "Seven Fugues" of 1932-4 to the 1962 "What the Children Told Me" and its highly dynamic, highly varied episodes. This is the sure touch of a composer of high merit. Palovičová has the composer's idiom well-in-hand and gives us performances that do the music justice.