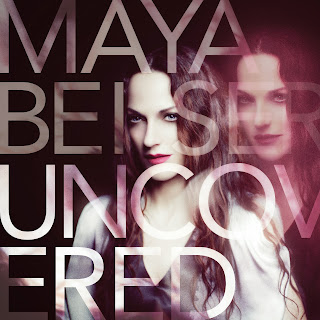 The beauty of the idea behind the old adage "you can't step in the same stream twice" is not only that it is true. It also means that you can go back to the same places later on and you find renewal possible, even actual.

That's the feeling I get listening to cellist Maya Beiser and her album Uncovered (Innova 900). On it she chose ten rock and blues classics as her repertoire. Evan Ziporyn, one of my favorite Bang On A Can composers, arranged them for cello and an electric/acoustic ensemble. It is one of the best fusions of rock and the new classics I've heard, because it does full justice to Maya's cello expressions, the implications and thrust of the songs, and the idea that there can be a radical synergy between the two stylistic complexes that is fully in keeping with the position we are in today.

The choice of songs, to begin with, is excellent. Led Zeppelin's "Black Dog", Howlin' Wolf's "Moanin' at Midnight", Hendrix's "Little Wing", King Crimson's "Epitaph", Nirvana's "Lithium" and so on. These are songs that jump out in the originals and if anything are enhanced by the new treatment.

Electric and acoustic bass, reeds, drums and percussion conjoin with multiple versions of Maya's cello. Maya handles the principal melodies as if in a concerted context and she joins with the other instruments creating the stunning backgrounds. Ziporyn and Beiser create nothing short of brilliant music out if it all.

Debate is currently raging in the social media right now on how to attract new audiences to new music and classical. This is one very good answer. It is that because it is unforced, an organic totality built out of love and respect for the two stylistic universes, love for the songs, and genuine talent.

With any luck it may set tradition on its ear, literally, with total conviction and sincerity. There will still be tradition, of course, but then there will be this album, too. That's the best of all possible worlds in my mind.