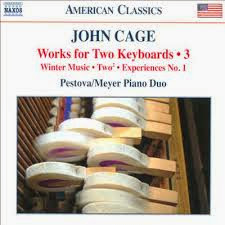 My initial involvement listening to the music of John Cage generally followed a three-tiered sequence. At first I listened and did not understand, then I delved pretty deeply into his musical philosophy and familiarized myself with his methods for each work I was hearing, then finally I learned to love most of the music as sheer listening, realizing that all performances were not equal but that the performer's artistry had a great share in the outcome, often as not.

The Pestova/Meyer Piano Duo are excellent Cage interpreters/realizers, judging from the second volume of Works for Two Keyboards and now the third, just out (Naxos 8.559728). (I've yet to hear the first).

I reviewed the second volume on these pages this past May 5th. I was captivated by how Xenia Pestova and Pascal Meyer handled the works. I am again feeling this way with the third and final installment.

By now our general familiarity with Cage's various periods and intentions are such that there is a generation of performers currently active who approach his music without hesitation, as music. In the past some performances were brilliant but others came off more as experiment than full-fledged composition. It's of course in the nature of Cage's view and performance instructions that any given performance can often differ widely from another. That's in part the beauty of his Zen-filled outlook regarding sound, but it also means that some performers find their way to a realization that satisfies where perhaps others may not do as well.

Pestova/Meyer give us some excellent versions of three works by the late composer on volume 3, separated widely in time but going well together. "Winter Music" (1956-57) was his breakthrough work on indeterminacy. It is meant for between one and twenty pianists, each with 20 pages of notation that they make a free selection from, with performers choosing the duration and attack of the notes given. Pestova/Meyer give us a 12-minute version that is filled with a dynamic, contemplative two-way dialog which works quite well.

"Two-2" comes from late in the composer's career, 1989, and gives the two performers a spontaneous, open-ended choice on the timing and duration of the written notes.

Both works call for creative performers who have developed some sort of vision for what they will do. There is no question that Pestova/Meyer have opted for a sensitively musical, aurally aware, yet very pianistic solution to both works. They are quite obviously attuned keenly to the sensual properties and potentialities of the widely varied note clusters and give us performances that glow in a thoughtful way.

The final work, "Experiences No. 1" from 1945, has that diatonic Satie-esque aspect of the composer at its finest. It is a three-minute morsel that is played with finesse and leaves you wanting more. The best Cage performances do that, of course. His oeuvre has a virtually infinite range of possibilities all-told, and the duo gives us some very fine, acutely attuned realizations of key works that make you wish they did some more of the repertoire for us. Perhaps later.

This volume is pretty nigh indispensable for the Cage enthusiast, for the modernist acolyte, or even for someone who doesn't really know or understand Cage well. It is convincing because it is so musically pianistic. Highly recommended!