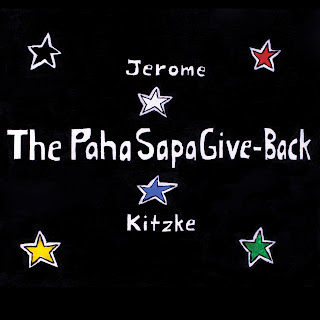 Generally I find recitation (as opposed to recitative, chanting or ordinary singing in whatever form) annoying. The word-text/lyric is critical. If it isn't something I'd appreciate hearing on its own, meaning some sort of literary work I'd want to hear recited on its own, I don't always find the intervention of musical elements a help or an enhancement. That is, unless the musical treatment is so compelling it transforms the experience, I get antsy. The point is lost on me if there isn't something more to it. If the lyric is sung then there is the melodic element involved and that changes it all; but that of course is not recitation.

With those pre-conditions as a general rule of thumb I've found some recitation things in the contemporary realm that I've liked over the years. Not all that many. Like a comedy record they can wear out their welcome quickly unless the musical element is strong.

So we have Jerome Kitzke's The Paha Sapa Give-Back (Innova 891), an album featuring two recitations and a chant. It turns out that the album holds my interest. "The Green Automobile" features the prose-poetry of Allen Ginsburg. There is an intricate rhythmic timing of recitation and solo piano that gives you plenty of dynamics and vocal-musical interaction. The piano part fits the text quite well and has its own very attractive way about it. The recitation (by the composer) has great energy and measures out its verbal content in ways rather far removed from everyday speech. In the end, yes, this is good. It's a bundle of almost jazzy energy that appealingly reproduces the frantic quality of the Beat Generation in sound.

"The Paha Sapa Give-Back" title track takes us into a zone for modern percussion group with piano, playing with a ritual zeal that reminds of Japanese Kodo drumming. The group vocals put forward energetic chant based on the syllables "Paha Sapa" in various permutations.

The third work is the longest at 37 minutes. "Winter Count" features texts by diverse authors, Whitman, Rumi, Aeschylus, Helem Mackay, Harold Pinter, and anonymous. The theme is the horrors of war and the facticity of existence or its lack, filtered though various literary approaches, asides, vignettes. Jennifer Kathryn Marshall does the acting-recitation along with Barbara Merjan on the chant-moments which recur briefly throughout. (The latter also plays bass drum.) The music is played well by the quartet ETHEL. And it's the music that makes the listening especially worthwhile, in a sort of post-modern tonal vein.

Somehow Kitzke gives us much more than the obvious here. The musical timing of the words and syllables meshes well with the music for a result that is more than just interesting. It is original, contemporary, well-executed and holds a certain fascination. I won't say this is a huge favorite with me this year. It isn't that. But it is good. It is an example of something happening now. Something different.