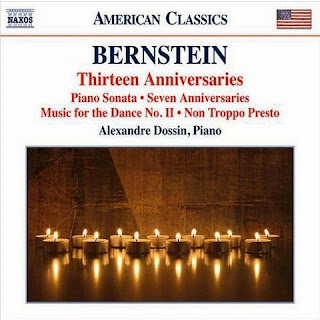 When you think of Leonard Bernstein, you do not usually think of the piano, yet there is where he started, and those familiar with his music will recall that his "Symphony No. 2, The Age of Anxiety" has a prominent piano part. He left behind when he passed a number of compositions for solo piano, many written in his early period. Thirteen Anniversaries (Naxos 8.559756) gives us an excellent sample of his output in this realm, with three works written in 1937-38, one in 1943, and the title suite, which he set down in final form in 1988, just two years before his death.

Alexandre Dussin handles the performance duties on piano, and he does so with a near-perfect understanding of the stylistic worlds they dwell in. He seems very much the right pianist for this music.

The program begins with the very memorable "Sonata for the Piano" (1938), a work that has a modern flair and some definite jazz feeling at times. It is an excellent work, an initial flourishing of that special brilliance of Bernstein that incorporates elements of the zeitgeist without sounding at all eclectic.

From there we encounter the two varied and fascinating sets of miniatures Bernstein wrote for friends and colleagues, the "Seven Anniversaries" (1943) and the title track, "Thirteen Anniversaries" (1988). These are rather brilliant sketches that show Bernstein's great feel for the piano and an individual approach that nonetheless draws on the influence of some of the century's great piano composers. The movement "For Jessica Fleischmann" some will recognize as a principal theme from the ballet "Dybbuk." But otherwise this is music we have not heard much, perhaps most of us not at all.

The final two brief works, "Music for the Dance II" (1938) and "Non Troppo Presto" (1937) enjoy their first recordings. They add to the already excellent program.

In the end anyone who appreciates Bernstein the composer will find in this music a more intimate side of his music. Anyone interesting in the modern 20th century oeuvre will also be intrigued and pleased with this, I would think. It adds a very worthwhile dimension to our understanding of Bernstein and has a greatly pleasing quality in itself, irrespective of its place in the scheme of things.