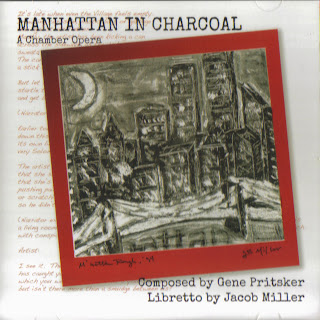 Opera in new music echelons remains viable and most alive. Yet the expense of a production and the often conservative, museum-like attitude of opera goers are both sticking points that mean there are not as many operas created by new music composers than perhaps we might like. A wonderful exception is an opera by Gene Pritsker, newly available on CD, Manhattan in Charcoal (Composers Concordance 0021), with a poetic free-verse libretto by Jacob Miller.

This is an opera with a stark, noir feel to it. It is set in the Village in the early days of this century. An artist meets a woman and they fall in love. She moves into his Village studio. Poverty, art, romantic entanglements and the art world at large enter into the picture against a backdrop of the streets of lower Manhattan. The opera centers around his 10 x 10 work on paper, "Manhattan in Charcoal" and its fate, which is linked in a very concrete way to the fate of the protagonists.

A narrator introduces scenes and summarizes events that occur outside of the scenario. The artist and his Beatrice form the major characters, sung convincingly by Charles Coleman and Lynn Norris, with Jacob Miller taking on the role of narrator. There is a chorus that plays the parts of gallery owners and critics. A chamber orchestra forms an important part of the proceedings.

Since the entire opera enfolds in around an hour, there is a terse compactness to the plot, enriched by vibrant imagery of the city in various moods. You get a series of scenes, moments in time lived by the protagonists, in an expressionist-modernist framework that is as vividly black and white as the central artwork.

The libretto has a direct yet poetically astute quality. Pritsker's score pulls it all together with some excellent music in the Pritskerian style, modern and convincingly fashioned, adding jazz and rock elements subtly but effectively, filled with inventive music very well conceived and orchestrated. There are some mostly complex repetitions to be heard here and there; they do not qualify the music as minimalist but rather bring it a step beyond it. In all the music carries the day brilliantly. Pritsker has a natural ability to write music that is unselfconsciously original and absorbing in a way that resembles nobody else.

It takes a few listens to fully appreciate it all. Once you acclimate yourself to the opera's mood and the complexities of the score you are left with a new work of real importance, a chamber opera that stands out as exemplary for our times.

It's in its own way a triumph, an example of why Gene Pritsker is an outstandingly innovative voice on the current scene. Highly recommended!