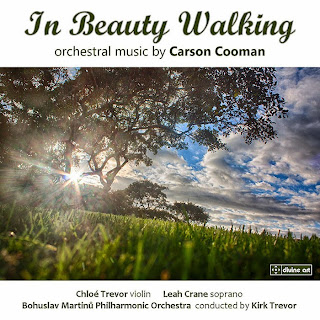 Not everyone composing today chooses to be a part of the advanced guard, of course. Some thrive in keeping traditions of the later tonal schools alive, finding their own way to make it new. Carson Cooman is one of the best and most prolific in this realm. There is so much of his music out I can't say I have been able to keep up, but a recent one has caught my ear and given me much to enjoy.

It is a compilation of four orchestral scores by Cooman, going by the name of the first composition presented in the program, In Beauty Walking (Divine Art 25117). On it the Bohuslav Philharmonic shine under conductor Kirk Trevor.

These are four works that revel, as the title suggests, in the possibility of a sort of pastoral beauty, some with pronounced folk leanings, others less so. The "Symphony of Light" (2003) for string orchestra is especially ravishing. If Aaron Copland's Appalachian Spring brings you joy (as it does for me) Cooman here gives you some of that same feeling, albeit in his own way. His "Folk Fantasies" (2005/13) for violin, percussion and string orchestra continues the home-spun pastoral mood even more specifically with great rhapsodic charm.

"In Beauty Walking" (2012) for soprano Leah Crane and orchestra has, understandably, a more song-like feel much of the time, with five short movements that capture the experiential joy of communing with the natural rural world, with music set to the poetry of Mary Austin. The last movement has a verve that brings the work to a stirring conclusion.

"Sinfonia Concertante" (2013) for violin and string orchestra has a bit more of a neo-classical element. Chloe Trevor does a fine job as the violin soloist. Medieval and Renaissance influences get transformed to something once again beautifully tonal and very personal. One can hear something of the pastoral Hovhaness in parts of this music, in its lyrical treatment of archaicisms, though very much refashioned to a Cooman sensibility.

So we have four Cooman works that dovetail well with one another, that express a sense of reverence and elation, of very real beauty. Cooman may be the most lyrical composer alive. He certainly moves to the center of such things on this program. It is in every way delightful. The music is impeccably conceived, orchestrated and performed here. Ravishing!