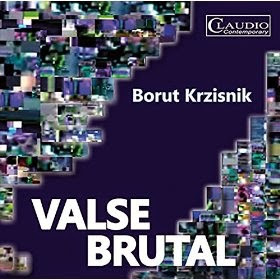 As I noted last April 2, 2014 (see that post), Borut Krzisnik composes music that is winningly biting and brusque, brutal in engaging ways. It is true of the last one, Stories from Magatrea, and it is true, perhaps even more so, of his latest Valse Brutal (Claudio Contemporary 6006-2). He is relatively young (b. 1961), apparently hails from Slovenia, and is very talented.

Valse Brutal includes seven interrelated movements/pieces that convincingly create a virtual orchestra from extensive orchestral samples. What makes it all work well sonically is the widely diverse orchestral sound excerpts of strings and other instruments playing expressively in both conventional and unconventional ways, things that live orchestras are called upon to do in avant orchestral settings today.

The music is a sort of equivalent of "Guernica" and "The Rites of Spring"--it is dealing with the absurdity of war and tends rightly to have a savage quality to it. But it sounds not like Stravinsky or anyone else in its purely musical aspects, though their are prominent rhythmic tendencies that are in the forefront much of the time--in no way, though, derived from the "Rites," but rather parallel to it in its originality.

Instead we get ultra-modern, ultra-expressive music that belongs to the present in its fundamentally new quality but hearkens back to expressive high-modernism in its feeling.

There is a poignancy to the music, a real beauty in its bleakness that I find irresistible. And in a moment you forget that this is a virtual orchestra because the phrasing is so convincing. And the music marks a composer of, dare I say, brilliant invention and imagination.

Anyone who seeks the cutting-edge in modern orchestral music today should listen to this one, preferably more than once. If you have the cash to buy it, by all means I recommend you do. Startlingly excellent!

Posted by Grego Applegate Edwards at 5:02 AM