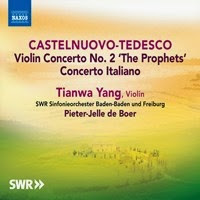 Mario Castelnuovo-Tedesco (1895-1968) was a key member, after Respighi, of the renaissance of Italian instrumental music in the 20th century which took place following a period of a dominance of vocal music, especially opera. He shares this distinction as a later arrival from the first generation of essentially modern-oriented composers which included Pizzetti, Casella and Malipiero.

His music stands on its own among this group. The guitar works he wrote have become mainstays in that repertoire, but his violin concertos too have made their mark, to greater or lesser degrees. Today's recording features the two of them, the lesser known "Concerto Italiano" from 1924, and the more familiar "Violin Concerto No. 2, 'The Prophet'" from 1931. Heifetz played both in his day and now we hear fresh new versions by Tianwa Yang and the SWR Sinfonieorchester Baden-Baden und Freiberg under Pieter-Jelle de Boer (Naxos 8.573135). The "Concerto Italiano" enjoys its premier recording here.

The performances leave nothing to be desired. Both works have considerable thematic interest and a grand sweeping tonality that is post-romantic perhaps, but filled with expressiveness. Tianwa Yang has a beautifully heroic, lyric tone and handles the sometimes difficult solo parts with world-class adroitness.

The second concerto is distinguished by incorporating Semitic-rooted melodic material (Castelnuovo-Tedesco's father was Jewish) and the influence is well-integrated into the composer's deft orchestral and solo violin writing. The "Concerto Italiano" is no less impressive for its wealth of eloquent craftsmanship. Both works get near ideal performances.

With the Naxos price this volume is hard to resist. It is a very worthy way to get to know Castelnuovo-Tedesco if you have not heard much of his music. And it will ring true with those who already know him well.

An essential volume for those seeking to explore the 20th century Italian renaissance and some fabulous music in its own right. Very recommended.