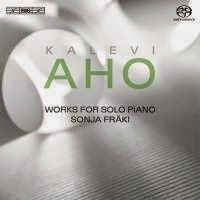 Kalevi Aho (b. 1949), a contemporary Finnish composer of note, is primarily known in international circles for his orchestral work, which to date includes 16 symphonies and 21 concertos. For a review of a CD of some of his concerted pieces see my September 24, 2014 post.

On the program today we have his Works for Solo Piano (BIS 2106) as played by pianist Sonja Frakl. It covers a selection of works from 1965 through 1993.

Of the earliest work, "Nineteen Preludes" (1965-68), all but #17 might have been written 100 years ago and not have sounded especially modern. They are expressively romantic and/or dance-like folkish, charming but except for the 17th, perhaps not yet signature in style except in a germinal sense.

The "Three Small Piano Pieces" (1971) take the lyricism of the preludes and thicken it all with modern harmonic spice. Suddenly the seeds of the earlier material have blossomed into a more extravagently advanced and daring music, yet short to the point of pithiness.

The "Two Easy Piano Pieces for Children" (1983) take that essentialist style and boil it down further to a simplified essence.

With the "Sonatina for Piano" (1993), "Solo II" (1985) and the "Sonata for Piano" (1980) we get the fully mature, serious modern composer for the piano, with something at times of the dance-like strains we have heard in the Preludes but fully developed into a virtuoso and harmonically-melodically original modernism that perhaps as a taste of Prokofiev-Shostakovitch in its temperament and a dash of Hindemith too, but in terms of the expressionist and earthiness tang of its basic approach, gaining and retaining an original ground that ultimately advances the music in a furtherance that is personal and original. In the end we get a more tonally ambiguous palette that takes the music further into the later 20th century while retaining an expressionist ethos.

These are the important works and we can appreciate the works leading up to them as preparatory and part of a continuous development. These later pieces generate genuine excitement in their virtuoso motor propulsion, their abstract but dense pointedness and alternatingly relative repose, contemplation, mystery.

Sonia Frakl has the prodigious technical mastery and a genuine understanding of the extraordinary expressive, tumultuous abstraction of these difficult yet moving works. She shines brightly and gives us a rather thrilling take on the later works, yet she approaches the earlier works with an immediacy that works perfectly for what the composer intended.

The three later works are monumental. The earlier works give us a developmental view and have much character. Taken together we get a thorough picture of Aho the writer for piano. It is a captivating voyage into the music of a master of our time. It is a good one to hear, surely. Ms. Frakl triumphs!