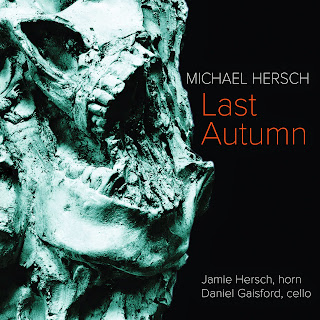 There are few living composers who equal Michael Hersch for his seemingly natural abilities. His music comes across as virtually effortless, extremely lucid and inventive, loquacious in the best sort of way. That doesn't mean that his compositions are in any way glib or off-hand. Quite the contrary. They are very serious, dramatic, and no doubt require a great deal of effort on Hersch's part to get to where they are. Yet they have a kind of natural, conversational brilliance that lays well.

He began as a kind of wunderkind. Between the ages of 25 and 30 he garnered a rather amazing number of awards and grants: First Prize in the Concordia American Composer Awards, a Guggenheim Fellowship, recipient of the Rome Prize and the Berlin Prize, the latter from the American Academy in Berlin. At the same time his early orchestral works were performed and acclaimed worldwide.

His 30s were marked by a pronounced shift from orchestral to chamber music. This blog has reviewed two remarkable recordings of works from the later period (type his name in the search box above for these). Now we get the chance to hear another such work, Last Autumn (Innova 907, 2-CDs), completed in 2008.

It is a very ambitious, long and you might say heroic work for the unusual pairing of horn and cello. The work fills two CDs. It touches on a contrasting set of moods and modes, from a brooding quietude, to exhilaration, to an almost brutal declamatory expressiveness. Jamie Hersch on horn and Daniel Gaisford on cello have the challenge to realize the full work on the CD set and they do so with the sort of Promethean effort that is so needed. They rise to the occasion with great success.

An easy summary of the work's many twists and turns seems out of my grasp at the moment. The complexities of the music demand extended close listening and I have indeed given myself to that gladly, yet there is an originality that defies any sort of simple pat response. It is music that has an heroic expressiveness we are more accustomed to experience in an orchestral setting. The music has backward glances into the historical maelstrom of stylistic possibilities, from allusions to contrapuntal musics of long ago to the romantics and early moderns. In the end this is a new sort of high modernism that works inside and outside of tonality, does not eschew dissonance but also plays upon harmonic possibilities that have earlier roots. Perhaps paradoxically it's the juxtaposition of all sorts of classical worlds upon an ultra-expressive framework that gives the work a very original life of its own. There is nothing eclectic but rather something distinctively Herschian about it all in spite of allusions to other periods.

I feel after hearing this work a good number of times that it is yet another landmark in what Michael Hersch represents to us today. He is beyond the wunderkind stage, surely. He manages to construct a long-from chamber work that, like some architectural masterpieces, obscures the structural support, the beams and joists that enable the graceful magnificence of the seen (heard) end result to hold together.

There is an immediacy to the music, the expressiveness of beauty and brutality together, that belies the no doubt hard work that went into its making. What remains is a heroic individuality that in some ways perhaps hearkens back to romanticism in philosophy but comes at us with a fully modernist sound. Hersch's rather wide acceptance, unusual for such difficult music, may be due to the very human qualities of struggle, of storm and stress that you readily hear in the music.

In any event Hersch continues to impress as one of the foremost compositional voices of our times. He succeeds so completely in what he sets out to do in part perhaps because the music expresses the multi-stranded uncertainties of our age, yet manages through sheer confrontation to surmount heroically the challenges imposed on all of us today. Or so it seems to me. In any event this is music on a very high plane. Perhaps a masterpiece. You cannot afford to miss it if you want to get a sense of where modernism is going.