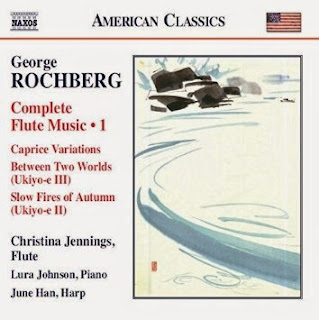 Stateside composer George Rochberg (1918-2005) was one of the first prominent serialists to abandon the imposed rigor of high modernism when he suffered the death of his son in 1964. From that point on his music turned back to a modern tonality, using baroque, romantic and original means to craft an equally personal style.

It is music from the later period we hear in his Complete Flute Music 1 (Naxos 8.559776), the first in a series of volumes featuring flautist Christina Jennings in the spotlight role. Christina is not only a flautist of great technical and artistic ability, she also is the daughter of Andrew Jennings, the second violinist of the celebrated Concord String Quartet, who rehearsed Rochberg String Quartets in the Jennings home as she grew up. So Rochberg's music was something she absorbed at an early age.

The sympathy she early-on gained comes through nicely in her performance here of three very evocative works.

"Caprice Variations" is a series of 20 freely treated variations on the well-known Paganini theme, originally written for solo violin. Ms. Jennings has transcribed 20 of them for the solo flute, with the principal theme stated at the end. It all sounds perfectly suited for flute and Ms. Jennings projects the various melodic moods with a beautiful tone and lively phrasing that seems quite right. There are times when her virtuosity seems virtually unparalleled in this performance. Bravo!

Lura Johnson takes on the piano role in Number 3, which is marked by a modern expressivity that has a palpable relation to shakuhachi music from Japan, only transformed into Rochberg's own idiom. The same might be said also of Number 2, which is distinguished by some very effective scoring for harp, which sounds almost koto-like. June Han does a fine job with the harp part. This work has the shimmer of impressionism, with a clear lineage going back to Debussy and Ravel, but with a pronounced traditional Japanese influence and a special Rochbergian twist as well.

For these two wonderfully poetic "Ukiyo-e" works, excellently performed and very much Rochberg at his best, it is worth the price of admission alone. But then you get the engaging "Caprice Variations" as a very pleasurable bonus. Christina Jennings soars with wondrous performances that satisfy, and Johnson and Han sound perfect in their parts as well.

It is vintage later Rochberg, music that is accessible to all listeners who make the effort, but a welcome addition to those who already appreciate Rochberg and his version of later modernism. It is a winner!