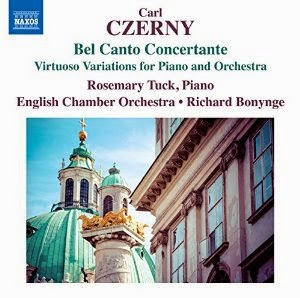 Anyone who took classical piano lessons for any length of time sooner or later tackled some of the technically oriented exercises of Carl Czerny (1791-1857). These are cornerstone pedagogical staples and have been for a long time. Yet during his life Carl Czerny was as much known for his formal compositions. With time the latter have largely gone unperformed for many years and are all-but-forgotten these days. Yet there are from time-to-time recordings available that show what he could do, and it can make for pretty impressive listening.

Today's compilation of "Virtuoso Variations for Piano and Orchestra," Bel Canto Concertante (Naxos 8.573254) gives you a good 70 minutes of works that Czerny himself classified under "brilliant pieces for concerts," as opposed to his more "serious works." And indeed, these sparkle with dazzling piano parts, have much to offer in the way of accessibility, but do not go out of their way to go beyond charm. All four concerted pieces included in the album are variations on a particularly well-received opera of the day, Bellini's "Norma," Auber's "Fra Divolo," Bellini's "Il Pirata," and Pacini's "Gli Arabi nelle Gallie." These were operas whose principal melodies were, one presumes, familiar to most in the audience (imagine that today with a contemporary opera?) and Czerny's goal was to write a series of bright and bubbling variations that would be likely to please concertgoers.

For this recording the exuberantly virtuoso piano parts are quite nicely performed by Rosemary Tuck. The venerable English Chamber Orchestra under Richard Bonynge ably and enthusiastically provide the orchestra backdrop.

In the end this music does not convince us that Czerny's modern neglect is unjustified. For that there are compositions on the serious side. What this album gives us is a lighthearted, skin-deep beauty that now seems naive and perhaps can endear because of that. It is a thoroughly delightful and beautifully performed late-classical/early-romantic repast of musical bon bons and hot chocolate. It is not music that stands out as seminal or even very important, yet it has charms and gives you a refreshing sort of palate-cleansing in between more substantial musical courses.