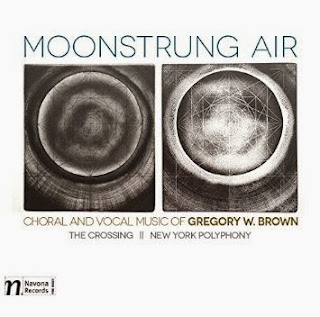 When it comes to vocal ensemble and choral music, the contemporary music world seems to offer less of it these days, as compared with chamber and orchestral works. That is my impression. Why that is I do not know, but when the music presents itself I tend to pay attention. A nicely put-together volume of modern contemporary works for voice can be had in Gregory W. Brown's Moonstrung Air (Navona 5989). It features six works performed variously by three top-tier groups, the larger choral ensemble The Crossing, conducted by Donald Nally, the mid-sized "Spring" Ensemble with Eric Dudley, and the vocal quartet New York Polyphony. The first and last ensembles have been critically acclaimed for their previous recordings; the middle group would appear to be specially formed for Brown's "Spring" but sound very good as well.

Gregory W. Brown's vocal music has a good bit of the influence of early polyphony and folk-archaic strains, but reshaped to his own personality, with the tang of the modern to remind you that this is music of today. This is not music that follows strictly or consistently the pre-Palestrinian or Palestrinian rules of counterpoint yet has beautifully fashioned part writing that evinces some of the aura of earlier times.

The "Missa Charles Darwin" performed by New York Polyphony and the "Vidi Aquam" by the Crossing are high points in the early-in-the-late mode, very convincingly wrought. "Three American Folk Hymns" makes use of old American vernacular and shape-note hymns redone with real charm. "Entrai, Pastores, Entrai" is based on an old Portuguese Christmas carol. "Spring" has as its text a translation of an Ancient Greek text by Anacreon. "Five Women Bathing in Moonlight" sets the poetry of Richard Wilbur, depicting a seaside excursion in the 1940s.

The performances are exemplary, the sound excellent and the compositions show us that Gregory W. Brown takes to vocal writing as a natural. The music has eloquence, verve and old-in-new panache.

I find the music uniformly delightful. It will appeal to those who respond to contemporary choral music and no doubt also to those who might prefer early music. There is enough to thoroughly engage and please both camps, and those in the middle.