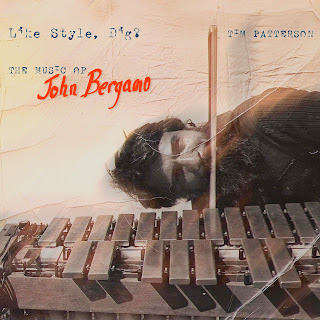 High modernism heralded in the virtuoso percussionist, initially as a part of a section or ensemble and then in the '60s also as a soloist who might perform works unaccompanied. Players like Max Neuhaus set the pace and others soon followed. A body of repertoire for the soloist rapidly developed. The solo percussion music of John Bergamo from that period lives on in an anthology of works played with great skill and imagination by Tim Patterson. Like Style, Dig? (Innova 899) brings to us six works in one or more movements, four composed in the '60s, one from 1985 and one from 2000.

As is characteristic of such solo music, the pieces call upon the percussionist to move rapidly from sound color group to sound color group, often enough via movement from instrument to instrument (pitched or otherwise) as a sort of "one-man band," but also at times concentrating on a single instrument or family, such as the marimba or suspended cymbals.

The music of the early period understandably follows the sort of asymetrical arcs favored by high modernist style in those days. The later works stray from that paradigm at times. In both cases the music is excellently crafted and inspired.

Tim Patterson gives us definitive performances that all who appreciate the sound possibilities inherent in the solo percussion oeuvre will find quite absorbing and worthwhile.