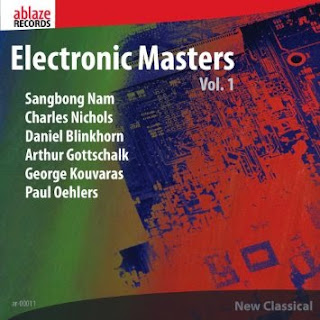 Electronic Music arose in response to the advent of the tape recorder, which made it feasible to juxtapose and edit disparate sounds and transform them via various processing techniques. Tape splicing, electronic oscillators, the rise of increasingly sophisticated sound filtering devices and of course the coming of the synthesizer led to a body of works that reinforced modernism's belief in science and technology as a means to project us into the world of the future. And the music also reflected the modernist agenda of increased sound color and, eventually, the Serialist development of increasingly complex rhythmic appearances of a wide range of pitches, registers and timbres in a pointillistic matrix.

Perhaps the peak of the initial phase of electronic music was reached with Stockhausen's monumental "Hymnen" a long work whose main source material was the national anthems of every country on the planet. Sometime in the early-ish '70s of last century electronic music ceased to be given the public attention it had and composers tended to go underground, though much of the innovations especially via synthesizers entered into pop, rock, r&b, rap and other mainstream musics where it remains today.

The millenium and the rise of digital production has given Electronic Music a new life, and we can hear new composers and new compositions more readily and more abundantly these days if we look for it.

The compositions make much use of musical instruments, voice and natural sound as their source materials and something less of "pure" electronic sound. There is a tendency to work with particular sound types in any given work, less of the kitchen sink, everything together sort of collages or the bleep-and-bloop scatter sounds of the high modern era.

The music tends to use the natural sounds in varying degrees of electronic processing, so that often enough one recognizes the source sounds for what they are along with their processed variants. There can be ambiance, orchestral densities or chamber intimacies.

The anthology does not introduce much in the way of the noise-oriented composers. The works represented here tend to have pitch as a constant, with unpitched, noisier elements present at times but never thoroughgoingly out-front in the extreme way of some of the more ascerbic, astringent-oriented practitioners out there these days. Daniel Blinkhorn perhaps is the exception, but his "Anthozoa" has lots of pitched implications and does not jar us with the more noisy sorts of noise of the fringe.

For all that these are not representing the extreme avant electronic composers so much as those who work in the new music middle-ground. Of course that is fine. The resultant mix of works segues well. It all gives you a vivid and rewarding listen to some accomplished sound poets who show us part of the state-of-the-art in Electronic Music today.

What else that is not covered here is the increasing growth of live electronic music. No matter, since that is something that has over time formed an almost a separate substyle and a single volume of an anthology cannot properly cover all that as well. So perhaps it is best to leave that aside for another anthology in future. As it is there is a wealth of musical sounds here to digest, all representing an evolution of the "classic" electronic studio work.

It is an adventure in new sounds, varied, contemporary and well-wrought regardless of the composer and work represented. Recommended!