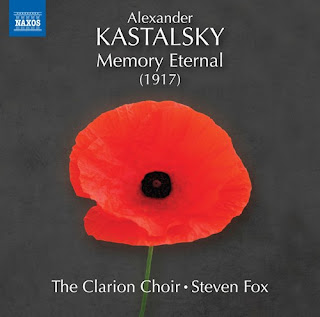 You live your life and things happen, mostly in the middle of everything else. Just a week ago I fell rather ill at the same time as the CD at hand today was on the regular rotation of listens I give the music I plan to review. It turned out to be music that spoke to me vividly in the unwell state. Well I might say along with Woody Allen that the Russian creative mind has perhaps a unique window onto death. That I have felt ever since I read "The Death of Ivan Ilyitch" just after high school. All this however is ultimately the context within which this music came to me. It found me in  a mood that certainly was sympathetic to what the program of music is about.

And what is that? An album of music centered on an early 20th-century Modern approach toward a present day rethinking of the music of the Russian Orthodox church. This in the hands of the leading exponent of such things then, before the Russian Revolution cut it all short.  I speak of composer Alexander Kastalsky (1856-1926) and his reworking of the Orthodox Memory service to note the victims of WWI. Memory Eternal (1917) (Naxos 8.573889)  was the liturgical reworking of a Requiem the composer wrote at the time. The very gravitas Memory Eternal comes to us in its World Premiere Recording as do several shorter Premiere Recording works from  1897-1905.

The Clarion Choir under Steven Fox sounds angelic, deeply sonorous, everything you might hope in a performance, And the Memory Eternal work, running some 40 minutes, gives the listener a broad spectrum of styles amalgamated without unsightly stitch. From monodic chant passages and drones of great gravitas, we hear too middle ground choral material that has a more elaborate harmonization and or complex part writing and then too a fully Romantic-Modern contemporary (for the mainstream of 1917) florid complexity. And it all fits together. I love how the composer at times integrates the ancient Dies Irae hymn into the music.

I am very pleased with this. It is not at the edge of what one might have written in 1917, but it is very fine writing, beautifully performed. So I definitely do recommend this to you.

Posted by Grego Applegate Edwards at 8:20 AM