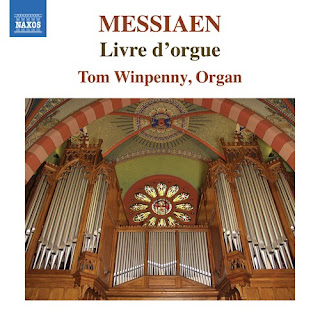 In  the course of a lifetime of listening and appreciation, one sometimes realizes that what one returns to, remembers vividly can be subject to the accidents of chance as much as the inherent worthiness of a work vis-a-vis others that might compete for time and attention. So for example Messiaen's Livre d'orgue (1951) is a work I may well have had a version of buried in the recesses of my collection as it stands right now. Yet I do not remember hearing it. Still, when searching the net for the cover art of today's release I came across a good number of previous recordings. This is ever an indication of the currency of a composition, surely. I have not been paying enough attention? Always there are limits to how much one can absorb. But the present can ever be time to make up for a lack. All this surrounding the fact that Tom Winpenny in his admirable devotion to the Messiaen organ music in the series of releases he has performed on for Naxos (which are supplemented by performances of other organists) has now given us his own Livre d'orgue (Naxos 8.573845).

For whatever reason, partly no doubt that this is well performed, the Winpenny version is the first I can recall hearing. Yet as I have been living with the music in my pre-review preparations I hear how the work is quite remarkable and seminal in an already seminal series of organ works. It is perhaps more abstract than some of the other staples of his output. There are less obviously melodic-thematic elements that make an imprint on one's memory, so that you must listen all the more and all the more carefully to come away from the music with a distinct impression.

That means perhaps that the music is slightly more "difficult" than some of the others. Yet there are so many incredibly advanced and complex aspects to this music and its seven movements. What makes it difficult is what makes it so special maybe. The music was begun with the idea of writing a book of rhythmic studies for the organist. And indeed the Livre gives us some brilliant rhythmic subtleties that come out of "Hindu" music practice and also in the course of adapting birdsong to his musical vision. Sound color, a pointed timbral expansiveness, markedly expressive modalities and edgy harmonic idioms are the rule, with a range of dynamics and moods that show by then how much his earlier studies with Marcel Dupre had flowered into a fully orchestral conception of the organ within his own then ultra-advanced Modernity. All his organ works are exemplary of how his music was developing and here we are in a way half the journey onto the path Olivier so brilliantly followed and its blossoming forth in birdsong inflected and wholly "other" musical becoming. When listening as a mere listener with a "naked" ear some of this may pass you by, like when admiring a building marked by a unique and innovative beam-structure. You appreciate the beauty of the finished structure and may unless looking inside carefully remain oblivious to how it was built. So in a way some of this is not all that critical when you first experience the music. Later details start to emerge in bolder relief. Nothing of that should matter to us if we hear the music first and foremost as music. Then again music can be experienced in ever-deepening levels and one should in time immerse oneself the more in how it does stand as one knows it more fully.

The single movement "Verset pour la fete de la Dedicace" (1960) that opens the program gives us a bit more meditatively oriented  treatment of the rhythmic and birdsong singularity he was decidedly occupying in musical semantic space then. It is another work to be treasured as well, different enough that is not quite in  a serial relation to the Livre as it is a new stepping forward.


The program is rounded out by the brief "Monody" of 1963 and the world premier recording of his short "Tristan and Isolde: Love Theme" from 1945.

The entire volume serves to remind us why Messiaen is the Poet Laureate master of the organ work in the Modern period. Performances and sonics are world-class. At the Naxos price there is surely no reason to hesitate. Essential fare for an understanding of the Modern Project as it applies to the organ. Winpenny emerges triumphant. Messiaen continues to beguile. He was matchless. Highly recommended.
Posted by Grego Applegate Edwards at 7:57 AM