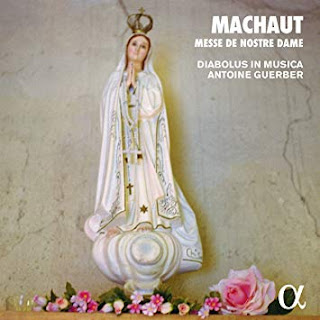 When I studied very briefly with Morris Lange (Tympanist and Percussionist with the NY Philharmonic) I popped into his brownstone in NYC a little early and managed to catch the end of his lesson with a graduate student. (I was 18 at the time and star struck!) They were working on the percussion part for Histoire du Soldat. As they finished up he turned to his student and said, "Yes, so-and-so is discovering Beethoven's Later String Quartets for the first time. I envy him!" The thought made me smile and of course I got it. When you discover amazing music and listen through the first hearings you get a thrill that those who have gone on to listen countless times remember and, yes, get a twinge of regret that they cannot go back to the thrill of discovery of those first days, though one remembers how it felt. Life can be like that. And so also music. Morris had hit upon something I thought profound. And I start off my review today with this story because anyone who reveres music will no doubt recall such first brushes with immortality.

And it relates to the CD at hand. For Guillaume de Machaut (1300-1377) was a master of Medieval polyphony, one of the most marvelous things to hear well performed in 2018 or any other year. And I dare to say that his Messe de Nostre Dame (Alpha Classics 351) is in its own way a Holy Grail of its kind, like Beethoven's Late Quartets a seminal music in the history and appreciation of seminal musics.

And I am in raptures today, more or less, because there is a new version of the work by Diabolus in Musica under Antoine Guerber. (And so the Alpha Classics CD number above.)  There is over an hour of glorious music to be heard. I go back far enough to remember fully the LP days, to a time constraint in the vinyl situation where if you wanted to give people a full Machaut Notre Dame you knew you had to step on it, so to speak. Diabolus is in no hurry here, as is correct and right. The other thing to note, and I joke a little, is that my first version was a used LP by Alfred Deller and it skipped at times. And so I got used to those skips! Well happily this CD does not skip! But then I listen for them now, so used to it I had become! Yet of course I've gotten used to the sequence as it should be, without skips, without undue haste, and vocally with a rich living resonance that brings home just how astounding this music is. It is like the Late Quartets a kind of paradigm in itself.

The archaic use of parallel fourths following each other in an elaborate counterpoint must have startled listeners then if they were used to the monody of Gregorian Chant. At any rate it startles US in the present-day, since composers and contrapuntalists went to great length to forbid would-be composers explicitly ever to do something like this again. Yet the austere and mystical beauty of the sound of this music makes it beautiful like nothing other, though Organum is also incredibly beautiful to me and so also very primal and ritual and in many ways alien to music that followed in the West. The archaicisms as you experience them are defining. This is not the musical world we are used to!

And for all that I can hardly imagine a better performance than this one. Gerber and Diabolus in Musica give every breath the utmost of focus. It is a true masterwork of Western Music, and it is sung with poetic artfulness. So I will envy you if this will be your first brush with Machaut and the Messe. If not it is a beautiful version so you may well want it anyway. My strongest recommendation! This is foundational.
Posted by Grego Applegate Edwards at 8:15 AM