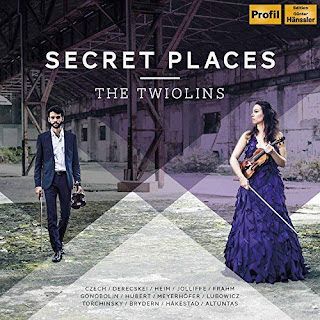 Whether we perform music, write it or just listen, serious music lovers identify with a certain music or set of musics. It is in part what makes us who we believe we are. And for those who embrace a wider spectrum of musical possibilities than might be typical of pre-communications era local life, identity is a complex thing, malleable.

The music I bring to you today surely complicates the identity of those who might embrace it. I speak of an album by the Twiolins called Secret Places (Profil PH 17002). It is music one might call eclectic, yet so specifically so that it comes to embrace a style-set that identifies it as something in itself. If we were to give it a name (following my friend who kindly sent it to me for review consideration) one could call it Neo-Classical. Why that term is perhaps only because neither "Modern," "Neo-Romantic," "Post-Minimalist" "Radical Tonality" nor "Postmodern" quite captures its stance, though in reality there is something of all of these involved, maybe even at moments "Post-Impressionist." It is far enough along into a distinct musical identity that it looks perhaps more of its time and future than of the recent or far past.

First a moment to dwell on the performers. The Twiolins are Marie Luise and Christoph Dingler, two rather young exponents who provide a marvelously evocative handle on the music and its soaring melodicism atop a well-healed series of sometimes fiddle-like double stops. They are near ideal exponents of this music, with a clean crispness of brio and folk-endowed fullness that is rather remarkable to hear. They seem  to understand why it will sound idiomatically right to not press the sentiment contained to a sort of Gypsy froth extreme, though at times there is some of the chutzpah of such roots,  to stay within a sort of Classical containment that emphasizes note-by-note synchronicity rather than a sort of vertical emotive scaling that would take away from the love of sequence and continual movement the music suggests so well. And in that the way of playing recalls Shem Guibbory and others associated with Reich performance practice.

And at times you hear the influence of jazz and rock on the music as is right for a music of our time, surely. But you might also hear echoes of a Viennese waltz and other European aspects.

This is music that dances across the aural panorama more than it tries to create a sort of profound meditation in form. Not that the music is not ultra-musical. It is. It does not try as perhaps Haydn or Mozart at times did to create a long expository idiom of musical syntax logic. And so the "neo" might as well be thought of as "near" as much as "new."

We are treated to some 13 more-or-less miniature compositions running from between 2:13 and 8:42 each. The composer's names may be new and/or unfamiliar to you as they were to me. So we have works by Rebecca Czech, Andras Derecskei, Benjamin Heim, Edmund Jolliffe, Jens Hubert, Johannes Meyerhofer, Nils Frahm, Alexsander Gonobolin, Dawid Lubowicz, Vladimir Torchinsky, Benedikt Brydern, Andreas Hakestad and Levent Altuntas.

This Neo-Classic fare embraces the space especially of Europe perhaps, and the time of the very present day. We listen and feel we participate in the musical discourse of the time, but in any event that is always the case by the sheer fact of being present in the hearing of it all.

What we have to listen to is quite enjoyable, a treasure of violin performance and composition that emphasizes the two-violin nexus and elaborate part-writing that in turn create a real confluence of sonority. There is beauty and liveliness here in abundance. If there is not quite as much depth in this music as we sometimes expect from chamber music, it is like a refreshing drive though the woods where you will not experience regret or dissatisfaction for embarking on the  journey. Like a series of folk dances, the music does not come across as deep but rather of the earth. If it is not a diving expanse of loam, it is rich loam nonetheless. It is a delight. And so I do recommend it.
Posted by Grego Applegate Edwards at 7:57 AM