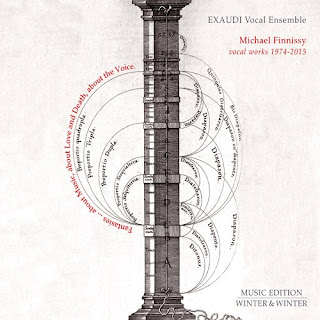 The music of Michael Finnissy forms an essential part of the High Modernist scene in our lifetime. For whatever reason I did not have the pleasure to encounter his music in a serious way until the past decade. It was the accident of chance rather than volition for me. Now I have been happy to hear his work and do not pass up the chance to do so. So accordingly I have grabbed a very nice example recently of his music on his Vocal Works 1974-2015 (Music Edition Winter & Winter 910 246-2).

This is a fine collection of some four substantial works scored for a capella vocal chamber ensemble comprising of between six and fourteen vocalists. The EXAUDI Vocal Ensemble handles the performances with impeccable precision and expressive clout. James Weeks directs the ensemble and the results are all we might hope for. Such music requires extraordinary ear-control and intonative precision. The ensemble is remarkably capable. To hear them sing these works is to hear something very difficult to get right and they do so with strength and agility.

There is a very noticeable timelessness to this music. It is invariably geared toward an almost spicy kind of dissonance. And perhaps that kind of harmonic diffuseness feels so much more projective when sounded by a vocal ensemble. So the music has a hard edge to it. The dissonances are most out front in the vocal articulation and so one notes the music to occupy an entirely controlled and measured but ultimately an extreme sounding kind of expression.

And of its timelessness it is most telling perhaps that the beginning work is entitled "Gesualdo: Libro Sesto." After all Gesualdo was a extraordinary pioneer in introducing dissonance as an expressive means of sounding in an era where such a thing did not exist in most any way. So Finnissy's title for the work is telling and most fitting. Fascinatuigly the work gives you the part writing flow of Gesualdo's time yet ventures into harmonically bold territory that even Gesualdo might have been astonished by. The effect is to throw the listener into an earlier time but yet within an almost Boschian world of measured infernality. That is not to say that it dives straight into some maelstrom, for there is a great deal of horizontal development, a syntax of furtherance more in accord with the time parceling of the polyphony of early music than a kind of sound event unfolding that one might get with, say, Xenakis or the early incarnation of a Penderecki. Generally like polyphony of the past the event flow is continuous if segmented and generally one thing flows inexorably out of itself into the next.

And so that first work on the program sets the pace for what follows. Not all of it sounds in the manner of early music but generally it does have forward momentum and temporal sequencing more in common with musical roots than perhaps is the case in an event unveiling scenario. There are times when there is a kind of event flow but there still is a feeling of time moving from left to right, so to speak.

And so we proceed though the Gesualdo piece and travel through four musically poignant works each topping in above ten minutes and sometimes a good deal more. "Cipriano," "Tom Fool's Wooing," and "Kelir" are what follows the "Gesualdo." As one repeatedly traverses the musical terrain set out for us by Finnissy we find ourselves in a considerably singular and rarified place where the music retains a rather total purity of expression. It is ultra-Modern, it is alternately tender and more extrovert in turn, but always with a careful consideration for the quality of expression that maximizes the musical voice in its emanation of musical tone.

It is exemplary music and certainly some of the most vibrant and single-mindedly advanced forays into a futuristic past that you might embrace. The Modernist Project comes full-flower in the music and if we open up to it and forget about the neighbors we become captive and captivated all at once.

Strongly recommended for all Modernists!
Posted by Grego Applegate Edwards at 6:59 AM