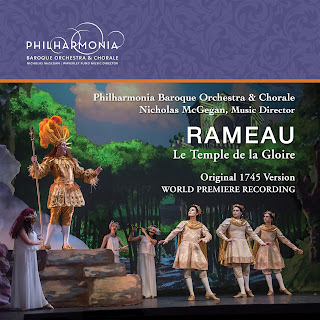 Jean-Philippe Rameau (1683-1764), it need not be said to most readers, was the leading light of the French Baroque and a singular force in the music of his day. His musical eloquence and sweet lyricism make him a singular exponent of his time and allow us continually to regenerate his music with modern-day ears as he remains a timeless titan of the muses.

Today I have the pleasure to report in on a release that we Rameau lovers  might well consider a major event--that is a first recording of the original 1745 version of his opera Le Temple de la Gloire (PBP-10, 2-CDs), as performed ably and brilliantly by soloists and the Baroque Orchestra & Chorale under Nicholas McGegan. As a live recording it has energy and frisson-inducing panache with nothing in the way of serious imperfections, far from it.

Why is the original version of great interest to us? The liner notes duly explain. Some of the historical reception problems that made the opera rather scarce arose at the very beginning. The controversy started via the libretto, written by Voltaire. It was an  allegory for the edification of the then reigning King Louis XV, who attended the premier. The opera's plot deals with three kings who attempt to enter the Temple of Glory, which according to legend and the opera plot was presided over by Apollo himself, and attended by the Muses. The "object lesson" involved the fate of three kings, only one of whom was welcomed into the Temple. The occasion was supposed to celebrate Louis XV's victory in battle, but the moral of the plot did not please him. He was offended. The Opera went on to have several more performances in its first version, then was withdrawn to be replaced by another drastically revised, which did not meet with commercial success either. Up until recently the revised 1746 version was the one that remained in circulation for later day performances, and of that rendering only a relatively small portion of the original version survived within. The rest was utterly different. Aside from kingly disapproval the opera was apparently further problematic to contemporary audiences as a whole.  As an opera-ballet of the times it was not a problem for its length--since the amount of music and dance required to fulfill both dream and visual dancer spectacle usual meant for a long program. Nevertheless such a work was supposed to remain light on serious subject matter. The object lesson Voltaire built into the libretto was that the worthy King must put the interests of the people foremost. He was never to be a conqueror or tyrant. It was too much apparently for the pleasure-seeking public of those days! Their brains hurt!

Fast forward to today. The original manuscript of the 1745 version remained obscure until the University of California at Berkeley found out about its existence and acquired it a number of years ago. The upshot of it all was a new working edition of the opera based on this original and ultimately a triumphant staging of it at Berkley with the artists before named as the performers. The present recording is taken from those World Premier performances. And a very good thing it is, surely.

I have not had the pleasure to hear the 1446 version of Le Temple de la Gloire so I cannot comment on the differences. But in any event there is so much in the 1745 version that is not in the later version that this perforce becomes a major event in Rameau reception.

What I can say is that the music is most delightful. As an opera-ballet it has a good deal of instrumental-only sections and the 146-minute playing time means we get a great expanse of unfamiliar Rameau to like.

The performance is very nicely idiomatic of the French Baroque period. The vocal soloists, the choir and the period orchestra sound as pleasing as one might desire. No matter what measure you use, this is a landmark occasion, for the newness of what we hear, for the quality of the music, for the quality of the performance. Anyone who loves Baroque opera and/or Rameau will be pleased to hear and have this music, I would warrant.

Posted by Grego Applegate Edwards at 11:12 AM