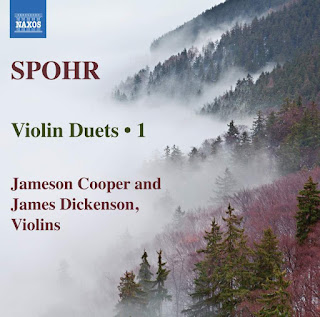 The recording I speak of today might never have been made if it wasn't for the Naxos dedication to worthwhile but neglected corners of the Classical repertoire that in part distinguishes the label's way of proceeding. Their series of recordings of the music of Spohr is but one of the nice examples in the Naxos release schedule, albums that make available the more unusual possibilities at a nice price. So we have today Spohr's Violin Duets 1 (Naxos 8.573763).  The performances are poetically and quite respectably in the hands of violinists Jameson Cooper and James Dickenson.

Spohr (1784-1859) was one of the leading composers of his day. If he was overshadowed in part by Beethoven, so was everybody else. Yet too he had absorbed what was happening in the early Romantic period and accordingly fit his attention to Classical form within a more feelingful ethos. Most importantly he wrote extremely well-crafted, original music across the spectrum of forms available to him, from the symphonic to the chamber realms. Writing for the violin was a major concern and his Violin Concertos give us some beautiful examples of how he thought of the instrument and its expressive possibilities. These duets are a greatly more intimate setting for his violinistic concerns.

Perhaps the most remarkable item on the program is Spohr's "Three Duets for Two Violins" which he composed when only 12-years old!  We see he was already solidly into his calling and the music is in no way a bad thing! Of course the 1824 "Three Duets for Two Violins, Op. 67" is the more substantial offering, but all of it shows well wrought interlocking parts and a definite melodic freshness. If it is more Mozartian than Beethovenesque one might say that Spohr does manage distinctively to occupy a niche where that may be the case, but in the chamber realm it is pretty clear that we are not so much in a moody so much as a tonefully outpouring realm. It is more akin to "Eine Kleine Nachtmusik" than "Don Giovanni," more "Diabelli Variations" than late String Quartets, and of course it is Spohr and so has something very Spohrian about it, in the way its melodies unwind.

For those not familiar with Spohr this might not be a good place to start, unless the purely violinesque turf it stands on is what you prefer. His Violin Concertos might nonetheless give you a deeper glance into his more profound side. This is not light music especially but it is considerably light-hearted.

I find it most congenial listening. It is not essential. It is a happy thing to hear, though.

Posted by Grego Applegate Edwards at 8:44 AM