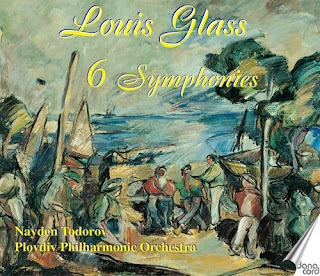 People like me who perk up when they find they rather suddenly can know some piece of the musical past before forever lost to  us will find the current new release of note. I refer to a boxed 4-CD set of the complete 6 Symphonies of Late Romantic Louis Glass (1864-1936). He was Danish, more or less the same age as Neilsen yet occupied a very different musical vantage point than his fellow countryman. While Neilsen followed a very personal muse, Glass worked within the giganticism and swelling volumes of sound associated with his rough contemporaries Richard Strauss and Bruckner.

For this complete edition we of course get all 6 symphonies and the added bonus of "Fantasia for Piano and Orchestra, op. 47."

Nayden Todorov conducts the Plovdiv Philharmonic Orchestra in this set of recordings, all made around the time of the Millennium. The recording quality can be good, or sometimes remarkably boxy with each part reproduced faithfully but not always completely pleasantly. The performances are quite enthusiastic, but at times slightly raggedly and ricketty. The point is of course that we now have the complete set of works, so one agrees to set that aside and try and concentrate on the music at hand.

At his best, Glass can charm and beguile with thickets of grand sound and musically notable passages that seem inspired. Other times Glass's reliance upon sequences may get the better of things, most often in the boldly large outbursts. The "Fantasia" is quite worth hearing and I generally like his"Wood-Symphony" No 4 and the Second with its part for choir.

In total this is a fair amount of music to get through and I unfortunately got to certain point where I questioned the need that all of us should hear all of it. In a beautifully balanced beautifully spinning set of performances likely yes, but these are not ideal though on the whole clearly giving us what the content is about.

So I must say at the end that this album is probably critical for a Late Romantic scholar or completest; otherwise it is a most curious gathering of works. He was well performed in his day. Why he may no longer be is perhaps not entirely surprising, though there are genuine sparks to be heard and some very lively music. Recommended for the specialist. Others may want to sample from the single works recordings of some of this available by other orchestras. I can now say that I think I know this composer well. And that is something in itself. I imagine he will never see a full-scale revival. So this may be a fleeting chance? It is your nickel.
Posted by Grego Applegate Edwards at 10:40 AM