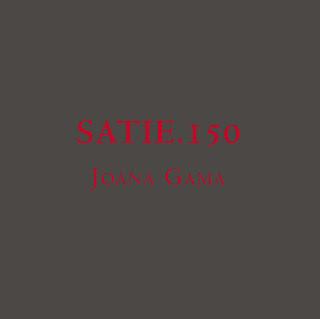 One might say there is more than one Erik Satie. One would be right. For there are several distinct style sets within his overall opus. And yet of course they are all simply Satie. Just as the Picasso of the different periods are all Picasso. In the end they are all a part of his iconoclastic, whimsical, even wayward refusal to fit in with orthodoxy.

Today we hear a nicely turned program of Erik Satie solo piano essentials surrounded by additional works which bear comparison with the music we hear. While we immerse in the program we partake in a kind of dialog with the composer whether wittingly or unwittingly. The original recital by the very excellent pianist Joana Gama was staged to celebrate the 150th anniversary of Satie's birth in 2016. The recital celebration graced stages in cities in Portugal and throughout the world during the anniversary year.

And now we get to savor the essentials of the program with Satie.150 (Pianola Editores). It is fascinating and worthwhile to hear the works that parallel or take in Cage's influence. John Adam's "China Gates" certainly has a consistent ambiance in common with Satie, and not surprisingly some of the repetitions that Cage was bold to assert so far before others. Carlos Marecos' "Tres Preludios sabre a mar" gives us a introspective set of pianisms that nicely draw a line to Satie yet stand on their own in great ways. And then Arvo Part's beautiful "Fur Alina" reminds us just how much a connection there is.

We have all come to understand how profound an influence Satie was on John Cage. The latter's early ambient "Dream" spells it out in a most haunting way, and reminds us that the piece is as much a classic as the Satie potboilers. And then finally Scriabin's "Vers la flamme" points to  unexpected parallele in the open sound and compactness.

Satie's most famous Gymnopedie (No. 1) is given the right amount of tenderness and robustness. Joana Gama brings out the playful and humorous twists and turns of "Embryons desseches" in the manner of a precocious child practicing works on the piano, becoming bored with the music and creating  outrageous and brilliant asides and departures. Joana does a great job capturing the fleeing mischievousness and mood swings throughout.

"Sonata Bureaucratic" brilliantly lambastes Clementi's "Sonatina Op. 36 No. 1" (1737)" and anybody who like me dutifully practiced that sonatina looking for closure and/or release will appreciate how Satie essentially forces the music to fly a different direction that is both childish and inimitable, filled with intelligence and humor. It is prime Satie and Ms. Gama puts into it exactly what you'd hope for.

Well I could keep up the play-by-play analysis except you do not need to know about every emanation on here. Suffice to say that Joana Gama flows alternately robust and tender, not so much "dreamy" (van Veen) or bubbling (Ciccolini) but very much with her own honest and heartfelt appraisal.

It is a ravishing disk, perfect as an intro to Satie piano and its milieu but different enough to warrant consideration by the Satie connoisseur. The inclusion of related pieces by others is a happy and thought-provoking one! Highly recommended.
Posted by Grego Applegate Edwards at 7:50 AM