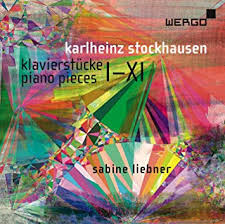 As the years seem to keep rolling by the status of Karlheinz Stockhausen as a major voice of Modern Music is never really in doubt. At least not among those who know his music well enough to experience it properly. Perhaps now we can look back and further a wider appreciation for his music going forward? By that I mean promoting a serious listen to the body of works without letting controversy mar our evaluation. Take his Klavierstuck (Piano Pieces) I-XI, written between 1952-1961. It was at the height of the Serialist period, yet we can listen now and we can hear for ourselves how expressive and alive the music is. This is not the music of a dogma! It breathes like the best of piano works that have come down to us. And I must say it deserves to be numbered among the very best of the last century.

I think such things as I listen again to the new recording of the first eleven (in 1979 he wrote eight more) by Sabine Liebner (Wergo 7341-2). The liners remind us that these works as his works in general were meant to sensitize us to the kind of inner growth music is so able to provide. There is a special work the listener must do in hearing the work. Working for the works involves opening up to what happens in each, to perceive "vibrations and vibrational relationships, organisms, and processes in order to become more alert, intelligent, thoughtful, polyphonic, aware and sensitive."  One might first think then that listening for Stockhausen is a sort of utopian project? But then anyone who took classes in "ear training," anyone who attended music school will recall that without stating it, the task of training the ear was indeed to accomplish such things. Yet of course most of the time the overall benefits of a keen ear were never overtly stated. Then again, music belongs to a utopia more than not! So. It should be a part of that, surely.

There is so much incredible music to hear in the Klavierstuck that I hardly know  what to say. This is music so well into its own discourse that words are at best a sort of sloppy seconds. And in the end the very involved things one might say about Stockhausen's very pliable sense of form in these pieces might take up reams of paper were the words turned into print. Indeed Wolfgang Rathert's admirable liner notes to this release supply some insights into all that. I will only note here that there is an involved Serial methodology the composer enacts most of the time. It entails permutations and specially defined parameters. Yet also there is a wealth of choice given the pianist at times, so that the role of performer is enhanced in parallel to what Cage sometimes built into his works. For telling evidence of such things Ms. Liebner gives us two versions of Kavierstuck XI (each running around 15 minutes) and to compare the two is to understand how in the act of performance the work gives maximum torque to the act of playing.

For this and other reasons there up to some point would be very good reasons why one might want to hear and perhaps even study all recorded renditions of the works. But I do not know in the end how one might align them all in some discussion. The version I first had many years ago I unfortunately had to jettison before I went on to graduate work, so I cannot even put into words my impression of this version by Liebner vis-a-vis the earlier recording. And notable too the experience of hearing such eloquently expanded music changes with time and one's own auditory and psychological states. One continually experiences new discoveries on repeated hearings and I can happily presume there can be no end to it.

What I can say however is that there is no mistaking the poetic beauty of Sabine Liebner's interpretations of these pieces. Others may be different and we would expect that. But I do not believe there can be better! It is a remarkable journey one undertakes when setting about on a listen through of these recordings. And then to return and hear again is to step into a different stream each time, really. In no case however would I question the striking musicality of Ms. Liebner's readings.

It is highly remarkable music and Sabine Liebner is a highly sympathetic artist, an ideal exponent. I cannot recommend this one more highly. But you must listen closely or there is no point to it all. This should never be relegated to the background. It will open up your ears if you let it. There is transformation built into the music, and Stockhausen expected it would change you in the hearing. We can be thankful for the chance to hear it. But that is up to you. It comprises some of the most important acts of Modernity in the last century. That is why I cherish having the set to hear many times.
Posted by Grego Applegate Edwards at 8:23 AM