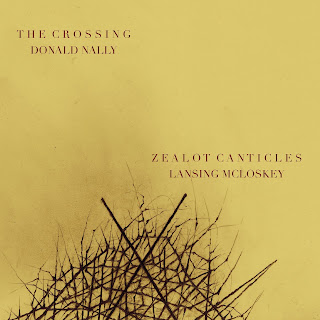 Now and again some contemporary vocal works come along that create story and meaning well, yet by so doing they synthesize a contemporary state-of-the-art view of where the Progressive Modern world has come so far. And it is not quite there until the work bulks and builds it together as a "this is now" gesture. I suppose looking back in my lifetime it was Bernstein's Mass that did that more dramatically than maybe any other work. Today we have something that less overtly but in its own way thoroughly defines and synthesizes the moment  for us.

I speak of Lansing McLoskey's Zealot Canticles (Innova 984). It is performed without flaw by the choral group The Crossing, with soloists and a quintet of instrumentalists who feel almost orchestral in their breadth and contrast to the choral group, which in turn shines with brilliance throughout.

This music is edgy yet markedly tonal, Modern in a synthetic way, with a kind of sum-uppance, creating powerful musical mood with a sure hand. The proceedings are based upon the writings of Nigerian poet-novelist Wole Solinka. It centers around the radically destructive potential of zealotry, its playing out in events and ultimately a plea for a widely ranging inclusiveness of tolerance. Of course in our day the mainstreaming of zealotry is very much with us, sadly and alarmingly in the very highest places of power and influence.

Well the dramatic plot here in the Canticles plays out the working through of such an action upon our general world. What matters most is the very palpable outpouring of excess and destructive emotionality in the spinning out of the work. The musical expression of extraordinary misgiving is most moving, bleak in a very beautifully expressive way.

In the repeating hearing of Zealot Canticles, An Oratorio for Tolerance  we can recognize how fully McLoskey has unveiled for us the remarkable expressivity that the later Modern stance has put together, and which comes to fruition so tellingly here. We experience how powerful and moving it can be.

The performers under Nally bring to us exactly the push and pull of excess versus abhorrence that makes of this work so compelling. Things can go to the very edge of despair, yet the opposite pull towards transformation and regeneration is never far away.

Like Picasso's Guernica, something can come along to comment on decisive tendencies that re-express deep feelings about contemporary historical developments. And so for example there was Hindemith's When Lilacs Last in Dooryards Bloomed, dealing with the death of FDR, Bernstein's Mass which tries to capture the giddy excitement, despair and uncertainty felt during tumultuous times, and now Zealot Canticles, about which we almost dare not name what it refers to in contemporary events. Yet you listen and think and you recognize.

It is a work of extraordinary beauty, filled with knowing worldliness and inner certainty. Outstanding.
Posted by Grego Applegate Edwards at 10:31 AM