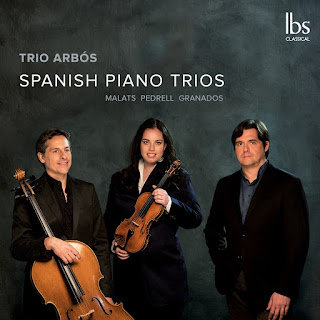 The world of Spanish Classical music is something special to me. There are so many aspects of it, just like Spanish music as a whole is a wide and fertile legacy to explore. Today three composers, one more known that the two others, give us Spanish Piano Trios (IBS Classical 122018) brought to us by the talented and brightly lively Trio Arbos. The works are a product of the Modernist impetus, of a turn of the 19th-20th century aim to rejuvenate the chamber music world with works that were for the time expressions of the Spanish contemporary current, well constructed, lyrical and expressive

We are here treated to some music that is pretty much out of the way and tucked into the corner of history. All of the works have an expressiveness on the level of Late Romantic works, but then there are pronounced quasi-Impressionist Modernisms and a pronounced Spanish influence that set them apart as something definitely more than ordinary fare.

The Enrique Granados "Trio in C Major, op. 50" is the very high point of the program. Granados has a presence that is undeniable in the four-movement work. The opening slow movement continues the introspective somewhat sad mood of what precedes it (see below). The Scherzo contrasts with a bounding exuberance that is thematically distinguished and worthy of the Granados autograph.  The Duetto features the trio-as-trio yet breaks the piano and strings into two groups. It has an appealingly  tender, lyrical quality. The Finale movement, marked Molto Allegro, does not fail to charge the musical psyche with very brisk and dynamic threesome pyro-dramatics.

Joaquin Malats was by the time of this work an old friend of Granados. They got to know each other as fellow-students and both looked to write a music imbued with local character.  The Malats "Trio in B-Flat Major" is distinguished right away in the opening allegro with a kind of folk-derived dance-like movement of pronounced Spanish feeling, expressive and soaring forth in ways that set the work apart in the repertoire as singular. The following Andante movement is movingly lyrical and perhaps a bit melancholy. The music has a kind of passion in reserve that breaks loose at times to soar movingly. The final Vivace movement bristles and tumbles along while continuing a Spanish-rooted sensibility. The music singles out Malats as a real voice of his time, helped not a little by the Trio Arbos devotion to bringing out the nuances and dynamic thrust of the music.

Felipe Pedrell, a Krausist in sympathy, teacher of Granados, gives us a supremely lyrical brood in his "Nocturne-Trio op. 55."  It is in no hurry to move ahead, but rather takes a long and lingering look inward to a quietly burning sort of longing with a kind of minor modalityvery much tapping into the local fount of inspiration. The slowly moving regret of the following "Elegia a Fortuny" extends and expands the melancholy mood with some very beautiful passages. Trio Arbos let the music get inside them and the overall effect for us is one of unrelenting, exquisite immersion. It washes over us and we are transformed by it. That is if we allow it to enter our musical-experiential beings.

In sum this is music anyone following the rise of the Spanish Modern period will welcome; but then so would anyone who appreciates a lyrical trio program and all who love Spanish classical music as a whole. It is played in lovely fashion by Arbos Trio, who seem born to these sounds. Bravo.

Posted by Grego Applegate Edwards at 7:44 AM