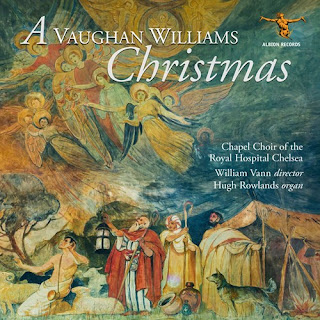 There is a truism that what might be too much of something for one person might be just enough for another. Nothing could be truer for music. I can remember the look of astonishment, even anger on a cashier's face when I would total up maybe $100 worth of LPs at a local record chain. Once the music esoteria specialist (hard to imagine there would have been  one now) actually explained to a new cashier as I was checking out that "people who are into Classical and Jazz tend to buy more records than other people!" Well if that wasn't the case? It still is I suspect.

So it also generally holds true for the serious music enthusiast who plays some Christmas Holiday music around this time of year. (I post this a little early so I do not forget.) The more you know the more there potentially is. Today I have a no-brainer, especially for those who love to explore the really old traditional carols, and for that matter those who love the music of Ralph Vaughan Williams. Given Vaughan Williams' deep appreciation of folk music and the local rooted music one could find around him there should be some connection between the two, so those that love the one might well love the other. Or then again there are those up for something substantially musical, who may not especially think about the composer or the tradition of English caroling, and again, this fits the bill. It is music you can love at first sight (hearing)  or come to love in time, I feel.

It consists of four groups of carols for choir (and often organ accompaniment) with the deft hand of Vaughan Williams taking a prominent role, either as arranger or in a few instances composer. So we have "Eight Traditional English Carols" (1919), "Two carols" (1945) (in a World Premier recording), "Carols from the Oxford Book of Carols" (1928) and "Nine Carols for male voices" (1941) in the first complete recording.

So we also have (happily) for the entirety of this recording the Chapel Choir of the Royal Hospital of Chelsea under William Vann. Hugh Rowlands is on organ for around half the carols. They all sound quite good, as good as one might wish for! All involved are clearly up for this music and the voices are angelic indeed.

For the Vaughan Williams arrangements Ralph is not overly interventional. He may at times bring out the beauty of the melody by scoring the choir to sing in octave unison while the organ fills in harmony, and there are some nice counter lines we can appreciate here and there. Mostly though it is Vaughan Williams's sure hand for choral scoring we feel and appreciate and his good taste in choosing some quite obscure carols peppered with some favorites such as "God Rest You Merry Gentlemen" and the "Coventry Carol." It is not a grouping of the tired and endless carols we sometimes find again and again. No "Silent Night!"  And to me that is a very good thing. They are some really fetching carols that are presented in near ideal performance and arrangement situations. One can most certainly not complain to hear his versions of "A Virgin Most Pure," "Wassail Song" (the other one!), and "On Christmas Night."

One must note that Vaughan Williams himself had much to do with the revival of old folk songs in general and carols in particular. He helped greatly in the collecting and preservation of them and had a hand as a co-editor of the comprehensive and influential 1928 Oxford Book of Carols (which we hear a nice selection from here.) The book in fact was a real factor in the resurgence of old carols, and so well we might appreciate all of this now, when we do still need to embrace old music traditions and keep them alive. All you who are musical anyway!

The original Vaughan Williams carols here are well worth having as well.

I view this collection as a real boon. The carols are very beautiful, the arrangements sterling, the performances stellar. I certainly plan to pop this one on every year from now on. I heartily recommend it for all who want to expand the holiday possibilities and get something memorable and haunting in the process. Happy this music! Splendid!