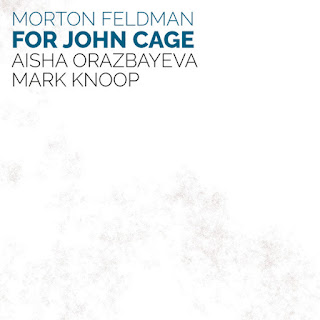 Much as it is "getting late early" in the world, to paraphrase Yogi Berra's characterization of the sundown-shadow experience in Yankee Stadium when playing outfield instead of catcher, there is a maturity-to-Modernity shift palpable now that may catch you by surprise if you aren't thinking about it. For example Morton Feldman's landmark For John Cage we may be surprised to hear has now been with us some 36 years (since it was written in 1982). I can remember the recording of it, the first recording I still have somewhere around here, and the surprise and elation it invoked in me when I first heard it. Yet as things stood in those days, time did not come to a stop (as if it ever does) so life went on, until I found that both Cage and Feldman passed (Feldman in 1987, Cage in 1992) and we have all had to wake up every morning and believe our lives really mattered, for they have! Mattered, that is.

Still it is a great shock sometimes to feel the passing of the past. Meanwhile For John Cage has gone on to become one of Feldman's most frequently performed and recorded works. And now there is another, a new one (ATD1), as performed by Aisha Orazbayeva on violin and Mark Knoop on piano.

Where and how do we find For John Cage so compelling? And do we? Well I surely do. It is Modern-Tonal in the pieces that go into the construction of the music. They are all the opposite of cliche, and they all have a quietness that is part of the Feldman way as you know. But then the familiar analogy of the music as a Persian carpet must be mentioned, because it really does do the music justice. Minimalism in the classic form repeats to mesmerize, to foreground itself  like we might if we say a word repeatedly until it becomes "other." The originality and brilliance of this Feldman work is that yes, there are repetitions but they function rather archi-tectonically. They form patterns like on an oriental carpet--the patterns recur only then to be replaced by other decorative patterns that if you envision the carpet unfolding before your eyes from top-to-bottom, you see work together for a whole that is a great deal more than just a sum of the individual parts. It is a matter of part-with-part holism.

So this music deftly unfolds and each motif is somehow related to what went before, yet not organizationally in connection like with Trance Minimalism, but instead decoratively-abstractly like the Persian rug. It is music that is exceedingly beautiful yet exceedingly odd compared to most music we hear. It is a masterwork, for sure.

And this Orazbayeva-Knoop version reminds you how hard it is to completely focus in on playing each pattern and moving ahead endlessly for 74 minutes. The duo execute it all flawlessly. And what I really like about the performance is that they do not try to connect each piece one with the others but rather let them spin out each in their own right. Now you might argue that it cannot be played any other way but I would still assert that each pattern piece feels independent here and that is a subtle but a very important thing. And no mean feat! The resulting "carpet" is stunning.

The other versions I've heard are by no means terribly inferior, not at all. This version though has the slight edge to me, and so it is the new favorite. It is one of the key works of the later Modern Era, I should think at this point. And if as Yogi said it "gets late early," in part it is because of  works like For John Cage that leap forward a considerable spatio-temporal distance now that we can measure the time between the writing of it and the experiencing of it today.

Very recommended.
Posted by Grego Applegate Edwards at 7:38 AM