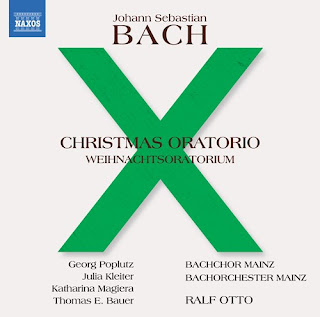 Johann Sebastian Bach may be an unearthly figure, one of music's true titans. The longer I live the more I feel this way. Yet in some ways he is like all other composers. It may be rather obvious but as wonderful as his music is the quality of any given performance will help determine how you feel about his music. For years I have listened to his Christmas Oratorio in versions that were respectable but it turns out not exactly inspired. As a result I've mostly looked to his St. Matthew Passion as something on the very highest levels of inspiration in the large-scale solo-choir-orchestra mode. Yet a couple of weeks ago I had the good fortune of receiving a new version of the Christmas Oratorio (Naxos 8.574001-02) by some fine soloists, the Bachchor Mainz and the Bachorchester Mainz, all under the direction of Ralf Otto.

As soon as I heard the really peppy opening Jauchzet frohlocket with its timpani blazing, I knew I was in a superior presence, I knew this version was special. And it is. They revel in the lyrical tangibility of the arias, with soloist and normally some instrument winding a counterline alongside and underneath with detailed sonority and emphasis, the tutti sections with full choir and orchestra really rousing and on-target. This rendition clearly relishes the musical content and gives it special care, which is much more than what I can say for the versions I have lived with so long. It does for the Oratorio what Mogens Woldike did for me with the St Matthew so long ago (and continues to do). Otto's interpretation scarifies the music. It lets nothing insignificant pass without careful consideration and airing. And of course there is very little in this music that might be considered insignificant.

One might quibble that parts of this Oratorio appeared before in his Cantatas. So? Are his Cantatas somehow inferior? But I do not try to put up a straw man here as much as refute what occasionally has crossed my mind in listening to lesser versions of this work. All that is in the past now, pretty much, because this version gives to the music all that I might wish it have. Everything fits nicely on two CDs and at the Naxos price, you do not have to go broke to own it. A real value is this one. And I am very happy to have the performances. They are to me a new benchmark. This version will doubtless take over in my Christmas listening cycle going forward. So I highly recommend it to you. Do not hesitate.
Posted by Grego Applegate Edwards at 9:21 AM