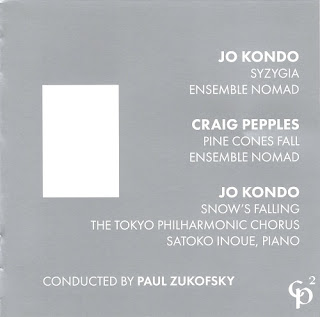 In the world of present-day High Modernism, it is true that there is a great deal of leeway around how a composer might proceed. There is a wider spectrum of possibilities one might address without generating some official or unofficial disapproval. The Dodecaphonic dogma days have been gone for a rather long while and though much excellent music was produced out of that working vision, there are other ways one can go of course, then and now. And happily there is no shortage of really interesting music to be heard today, as I mentioned in yesterday's posting.

An especially attractive offering just come to my attention is a three-work CD (CP2 CP 125) directed and conducted by New Music adept Paul Zukofsky, recorded in 2016, in the year before he left our world. It is music with a pronounced ambiance, a soundful stillness born out of the processes of nature, the reflections on life in-between the living of it, a perspective on the Zen of "suchness" perhaps. Harmonically the music is well within the Modern zone, without an insistent tonality, yet not especially dissonant. If you thought about it, if you listened hard enough you might establish a key center in your head, yet this is not music that is particularly tonal in some typical sense.

If you thought of Morton Feldman's classical music phases you might have some idea of this music, yet it is not directly derivable from this way of going forth. So that is only a rough idea of what you might imagine this music as.

So to the music itself, then. Jo Kondo gives us two of his compositions and they are both really worthwhile. "Syzygia" is performed nicely by a small chamber orchestra configuration handled well by Ensemble Nomad. It is a near atonal chorale sort of sound, ever wafting new combinations of tones and pronounced wind timbral transformations that are almost lyrical in their confluence. That is, if you are listening with an expanded New Music set of ears.

Craig Pepples brings up the middle of the program with Ensemble Nomad sounding his "Pine Cones Fall," like the other works a highly evocative ambient sculpture in slow motion, but in this case adding a near-pointillism of give-and-take between each instrument. Everything winds out as a natural growth, paceless dream, every instrument sounding its part in groups ever shifting. It is beautifully mesmerizing.

Paul Zukofsky with his dedicated focus on these three works reminds us how central a figure he was. I cannot imagine a more moving performance of these pieces. The renderings are seemingly as poetically executed as they were meant to sound. It is a masterful outing, in every way palpable in its peaceful yet insistent singularity. It reminds us that New Music can still be was "new" as it should be, that there can be a joy in the sheer viscous pleasure of the present-in-future, in the visceral presence of the hearing of it.

For you unabashed Modernists out there, and even those who are not quite sure but ready for something different, I give you my highest recommendation for this one. It is some awesome music.
Posted by Grego Applegate Edwards at 10:40 AM